Movie Review: ‘The Northman’ Proves Just How Heavy Head Is That Wears Crown 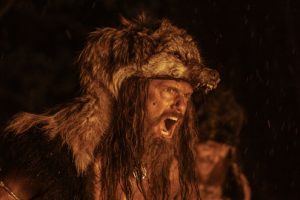 Heavy is the head that wears the crown.

Kings, queens and presidents often have the entire world in their hands.

However, there is often someone close to them that wants to usurp their power and assume their position on the throne.

But “The Northman” shows just how heavy the crown is for people who gain their power by ill-gotten means.

Furthermore, it shows that when one uses evil means to obtain power, they must always keep their head on a swivel for the “opps” coming to avenge something from the past.

In “The Northman,” King Aurvandil War- Raven (Ethan Hawke, “First Reformed”) is not just royalty in the stereotypical sense.

He does not just sit in a castle, with servants, detached from the real world around him.

The king is a great father to his young son.

He is devoted to his wife, even though those around him joke that Queen Gudrun (Nicole Kidman, “Aquaman”) has eyes for the king’s brother, Fjolnir the Brotherless (Claes Bang, “The Last Vermeer”) and the feeling is mutual.

The king has a son that idolizes him.

And because of that idolization, the king knows that he will have a willing student when it comes to training someone to take the throne when he is no longer in power.

The king begins training his son how to lead a people as a king.

Although his son is very young, the king knows that his days as a ruler are short.

He does not want to die of some health issue or of old age.

The king probably does not want to have one of his imbecile soldiers getting ice cream for him at a hospital with no legs when he could have died a hero with his soldiers in battle.

He wants to die at the hands of an enemy, alongside his fellow countrymen.

However, a person’s enemies are not always from an opposing crew, group or a nation.

Sometimes, the people closest to a person can create the most havoc and cause the most destruction.

When King Aurvandil War-Raven falls victim to betrayal, young Amleth vows to avenge his father’s predicament by any means necessary.

In “The Northman,” time moves on even if some people have never forgotten what happened in the past.

While many have forgotten Amleth (Alexander Skarsgard, “Godzilla vs. Kong”), he has not forgotten, or forgiven, those who did his father wrong.

As a child, he vowed to avenge what happened to his father and rescue his mother from those that took her and everything from their family, even the throne they once sat on.

But years after his father suffered defeat, the young prince has fallen a mighty long way.

The young boy who once had an entire kingdom at his behest, has become a brutal warrior who, along with others, destroys their opposition in battle, taking land and women in the process.

Amleth has forgotten his regal ways and has become a brute and savage, not the man of honor his parents raised him to be.

But he is no longer royalty.

He belongs to the savages and like people say when in Rome, do like the Romans do even if what they do on the battlefield is beyond barbaric.

After one battle, Amleth hears about what happened to his father’s former opponents.

Therefore, Amleth pretends to be a slave so that he can work for the person that took everything from his family, especially his father.

If he could play the slave role convincingly, the former prince might have the perfect opportunity to avenge his father once and for all.

But when Amleth finally gets his chance at revenge, he finds out that things were never what they appeared to be and that avenging his father might become more difficult than he ever imagined.

“The Northman” is a solid movie.

Not great but a little better than just decent.

Additionally, “The Northman” is an extremely savage movie.

But “The Northman” might take the cake when it comes to violent war images.

“The Northman” gets creative cinematically by switching from color scenes to black-and-white scenes.

Some of the black-and-white scenes give the film a “The Tragedy of Macbeth” vibe because the new “Macbeth” movie starring Denzel Washington and Frances McDormand is shot exclusively in black-and-white.

While the black-and-white visuals give the “The Northman” a certain aesthetic, some of the visuals are corny and fake like the beheading scene.

But to be fair, it might still be hard to make a beheading scene look real even with 21st century technology.

Nevertheless, the Gates of Hel scene might be the best scene visually in “The Northman,” with exception to the beheading portion of the scene because of the fiery imagery.

The film also benefits from strong performances by Skarsgard and Anya Taylor-Joy who plays Amleth’s love interest, Olga of the Birch Forest.

And while it is universally known that heavy is the head that wears the crown, Skarsgard more than holds his own and his performance catapults the film to above average.