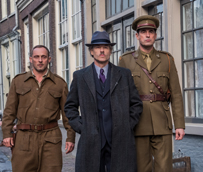 People often say that a fine line exists between genius and insanity.

For early 20th century painter Han Van Meegeren (Guy Pearce, “Lawless”), haters could not discern whether the adjective saint or Satan best applied to him.

And the movie, “The Last Vermeer,” which is based on a true story, effectively portrays how everyone is not what he or she appears to be once all of the layers of their complexities get peeled back.

Around 1945, after World War II, many Nazis and Nazi sympathizers found themselves on the wrong side of revenge.

The wrong side of history means one lives in shame for perpetuity.

However, the wrong side of revenge often leads to death when one participated in the slaughter of millions of Jews during the Holocaust.

During the war, authorities from the Dutch government discovered that some of their own countrymen had stolen art masterpieces from Jewish families who had gotten detained by Nazi occupying forces.

Artist Johannes Vermeer only completed around 30 pieces during his lifetime.

But all are considered priceless, especially the precious painting known as “Christ and the Adulteress.”

Instead of safeguarding the masterpieces of renowned artists like Vermeer, it became obvious that Dutch people were giving those pieces away to the Nazis to help fund their oppressive regime.

Not only has a Dutch citizen allegedly funneled the precious artwork to the Nazi enemies, but also that person allegedly worked as a spy against their own people.

Unfortunately for those who chose to collaborate with the enemy during the war, collaborating with Nazis became a capital offense after the end of the war.

In “The Last Vermeer,” the provisional government in Holland has appointed Captain Joseph Piller (Claes Bang) to investigate the claims that one of their countrymen stole the priceless artwork and gave it to the Nazis to help fund their attempt at global domination.

Joseph has an interesting backstory.

He married a Dutch woman with no Jewish ancestry.

However, as a Dutch Jew he joined the Resistance to fight of Hitler’s Nazi regime and had to flee underground so that he would not put the rest of his family in danger.

Together with his wife, they collaborate to help their countrymen defeat the Nazis.

With all of what the Nazis put the Dutch through, especially the Jewish community, Joseph has no tolerance for traitors and spies.

Joseph’s investigation leads to Han, a wannabe painter who never made it big in the profession.

In the art world, the word of the critics and experts will make or break an artist.

If the critics say that one is a genius, then that artist becomes a genius.

But if the experts believe that an artist simply does not have the talent, they never really succeed in the art world.

A work becomes priceless or a masterpiece only if the right people describe it as such.

Han never got that stamp of approval as an artist, before or after the war.

However, Han’s social standing sure did change during the war.

The struggling artist began to see his coffers increase, handsomely.

His parties in Holland became legendary.

Furthermore, his reputation with the ladies grew during this time, despite having a wife at home.

He even had several high-ranking Nazi officials attend his lavish parties for some reason.

All of that made him very suspicious during the investigation into the stolen Vermeers.

Therefore, Han is arrested for stealing and selling the priceless Vermeers to Nazi officials.

The only problem is that many people believe that he is a saint, incapable of selling his soul to the Nazi occupiers.

However, some believe he is a devil and an opportunist who would do anything to improve his standing in life and increase the attention placed upon him.

“The Last Vermeer” is another solid film to add to the extensive Holocaust/World War II film canon.

Other films have been more heartbreaking like “The Boy in the Striped Pajamas.”

Other World War II sagas have been more gruesome and brutal like “Hacksaw Ridge.”

But no film comes to mind that dealt with how the war, the Holocaust and the art world intersected like “The Last Vermeer.”

The star of “The Last Vermeer” is undoubtedly Pearce who portrays Han with flair reminiscent of Liberace and Bob Crew (Mike Doyle) from “Jersey Boys.”

But Han brings a swagger to “The Last Vermeer” that is needed in such a heavy film with heavy subject matter.

On the other hand, Bang plays Joseph with stately class and a demeanor suited for a leader intent on bringing truth and justice to a world previously ruled by evil.

With his height and job description, Bang sort of looks like former FBI Director James Comey, just with more credibility.

Performances notwithstanding, “The Last Vermeer” succeeds because it does not bog itself down with artistic jargon or history lessons.

Art and history novices will be able to follow “The Last Vermeer” quite easily because the storyline is easy to grasp.

Furthermore, “The Last Vermeer” succeeds because of its twists and turns.

The courtroom performances will remind moviegoers of the current courtroom debacle known as Rudy Giuliani.

Unfortunately, “The Last Vermeer” cannot last long in a competition with other films about the war and the Holocaust.

The bar has been set too high for this film to come anywhere close to some of its predecessors because there is a fine line between good and great.

And “The Last Vermeer” does not quite meet the threshold for greatness.