Movie Review: ‘Amsterdam’ Kooky But Cool, With a Message 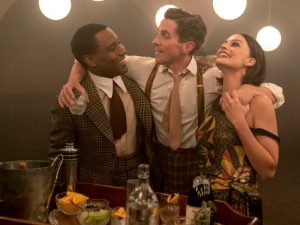 Watching the first 30 minutes, or so, of “Amsterdam” will lead many audience members to label the movie with the adjective of kooky.

Then one of the characters labels one of the other characters as “kooky” and audiences will then know that their assessment of “Amsterdam” is accurate.

“Amsterdam” is a kooky but cool movie that includes a message that is just as relevant in 2022 as it was generations ago.

In “Amsterdam,” Burt Berendsen (Christian Bale) and Harold Woodman (John David Washington) have developed an unlikely friendship that is not bound to the racial restrictions of 1930s.

Burt, a working medical doctor on New York’s Park Avenue, is convinced by his in-laws to enlist in World War I in order to garner more respect from the bourgeoise of New York City.

The upper class have yet to take to Burt’s medical practice because he is not from the social elite like his wife Beatrice Vandenheuvel (Andrea Riseborough) and her parents.

However, when Burt heads overseas to fight in World War I, he is definitely in no position to expand his clientele to the upper class of the Big Apple.

The war has left him wounded physically.

But the war has also changed Burt’s outlook on life for the better.

During the war, he befriends African-American soldiers like Harold and Milton King (Chris Rock) who have not been fully integrated into the war effort because of the color of their skin.

However, Burt and General Bill Meekins (Ed Begley, Jr.) are a couple of U.S. soldiers who refuse to see color.

The two see the African-American soldiers as their equals and an integral part of the war effort.

As a result, a deep bond and unbreakable respect is developed between the gentlemen.

Unfortunately, when the war is over, Burt and Harold discover that many Americans do not have a deep respect for the soldiers who lost life and limb protecting their freedoms overseas.

Many of the soldiers return home from the war disfigured and disenchanted with the way their lives have turned out.

Although all the soldiers should have returned home as heroes, many are treated like lepers because of their battle scars and wounds.

Therefore, Burt has dedicated his medical practice to treating wounded soldiers and using experimental medicine to try to get them back on their feet.

Likewise, Harold decides to pursue a career in law so that he could be a voice for the voiceless.

With all that Harold and Burt have experienced over the years, it is a no-brainer when they take a case presented to them by Liz Meekins (Taylor Swift), the daughter of General Bill Meekins.

Unfortunately, the military officer who played such a big role in bringing U.S. soldiers together across color and cultural lines has passed.

Although his death looks natural on the surface, Liz suspects some funny business is behind her father’s sudden demise.

Therefore, Liz hires Harold and Burt to get down to the bottom of the general’s death.

However, when Liz suffers a cruel fate shortly after hiring Burt and Harold, the lawyer/doctor team realizes that their lives are in danger too.

As a result, Burt and Harold must get down to the bottom of a couple of tragedies, while keeping themselves away from taking an early dirt nap.

What Burt and Harold discover in “Amsterdam” is a nefarious plot to change the course of history forever and recreate America into something that she was never meant to become.

The real dilemma for Burt and Harold in “Amsterdam” is to uncover who is behind the plot and to stop it before there is any more carnage.

In “Amsterdam,” Washington plays Harold in a smooth and sophisticated way.

However, he still plays Harold in a strong way.

Washington is still not on the level of his father Denzel Washington.

But there is a scene where his voice and mannerisms will have moviegoers doing a double take because he sounds just like his old man.

In “Amsterdam,” Washington’s on-screen chemistry with Margot Robbie, who plays his love interest Valerie, is undeniable.

In reality, the characters of “Amsterdam” break all the rules when it comes to racial interactions in the early 20th century.

It is also great to see Rock back on the big screen being himself despite playing the character, Milton.

Like Samuel L. Jackson, Rock has mastered playing himself in almost every movie that he appears in.

Despite having the same modus operandi, few ever tire of seeing talent like Rock and Jackson do their thing on the big screen.

There act never gets old no many how many times moviegoers see it.

Furthermore, “Amsterdam” benefits from being a period piece.

There is something about seeing old school cars, old school clothes and old school swagger on the big screen in modern times.

Even the criminals of yesterday had a sophistication about themselves that made crime and treachery look professional.

But one should expect eccentricity from the likes of Bale, Robbie and Malek.

But one should also expect great performances by some of the greatest actors of modern times.

Just remember to think kookiness when pondering the greatness of the cast of “Amsterdam.”