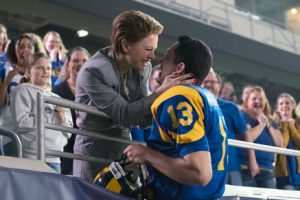 “American Underdog” does not fit the stereotypical definition of a sports film.

Obviously, “American Underdog” tells the motivating story of NFL Hall of Fame quarterback Kurt Warner who went undrafted out of Northern Iowa and worked at a grocery store and the Arena Football League (AFL) before finding Super Bowl glory with the St. Louis Rams in 2000.

But by focusing on Warner’s marital/relationship ups and downs, and his refusal to give up on his lifelong dreams, “American Underdog” provides a beautiful and inspiring ode to perseverance, dedication and faith.

In “American Underdog,” Young Kurt (Beau Hart) epitomizes so many young children dreaming of one day following in the footsteps of their favorite sports heroes.

For Young Kurt, watching the exploits of San Francisco 49ers quarterback Joe Montana in Super Bowl XIX in 1985 makes him aspire to reach the same heights when he gets his chance in the National Football League (NFL)

Unfortunately, it is hard to get noticed by NFL scouts if a player hardly gets on the field in college.

Even Kurt’s friend and teammate at the University of Northern Iowa Mike Hudnutt (Ser’Darius Blain) laughs at him when he puts together a highlight film to send to scouts and potential agents.

Mike cannot understand how Kurt thinks he has enough snaps for a highlight reel considering he has no highlights while playing for Northern Iowa.

In “American Underdog,” Kurt cannot even get out of his coach’s doghouse because he refuses to stay in the pocket, instead choosing to use his mobility to escape the pass rush before throwing lasers to wide open receivers.

Thankfully, Kurt (Zachary Levi) can persuade his college coach enough to get some valuable playing time as a fifth-year senior at Northern Iowa.

He does well enough at the Division 1-AA school to nab a sports agent with hopes of becoming a late round NFL draft selection.

Kurt goes undrafted and when his NFL hopes seem to pass him by, he finds himself stocking groceries at a supermarket just to help make ends meet.

Many recent college graduates would have more time to chase their dreams since many do not have family responsibilities or significant bills to pay.

However, Kurt is not the typical recent college graduate because he has taken a liking to Brenda Meoni (Anna Paquin), a single mother with two children.

Sports fans will also know how Warner’s sports career ends after finding success with the Iowa Barnstormers of the AFL.

Warner’s success with the AFL leads to another shot with the NFL as Trent Green’s backup with the St. Louis Rams.

When Green goes down with a gruesome injury, the Rams, and their coach Dick Vermeil (Dennis Quaid) decide to “rally around Kurt Warner” instead of seeking to trade for a more seasoned NFL quarterback.

In turn, Warner returns their faith in him by orchestrating the “Greatest Show on Turf” starring wide receivers Torry Holt, Isaac Bruce, Az-Zahir Hakim and running back Marshall Faulk (O.J. Keith Simpson) to Super Bowl glory, praising his wife and Lord and Savior Jesus Christ in the process.

His remarkable journey to the Pro Football Hall of Fame has always been known as one of the most inspirational human-interest stories of all time.

To many football fanatics, Warner is the greatest undrafted player in NFL history.

Furthermore, to accomplish what he accomplishes as an old rookie makes the journey that much more inspiring.

However, “American Underdog” will resonate with non-sports fans too because many people know what it feels like to think that their dreams have passed them by.

Many people know what it feels like to think their best days are behind them and they are too old to complete the goals they set for themselves as a younger person.

And many people know what it feels like to have someone special in their life that encourages them to keep going when the battle seems all uphill.

For Kurt in “American Underdog,” that motivating figure is Brenda and her family.

While “A Journal for Jordan” spends a little too much time on the main characters’ courtship, “American Underdog” gets the time element correct.

While the casting of Levi as Kurt is close to perfect, other casting decisions leave much to be desired.

In “American Underdog,” Nicholas Harris is unable to pull off the intensity, passion and charisma of former Baltimore Ravens middle linebacker Ray Lewis.

Additionally, Quaid is a Hollywood legend.

But he does not show enough passion to pull off the often-teary-eyed Vermeil.

However, it was great that filmmakers included Vermeil’s “rally behind Kurt Warner” press conference comments that have become iconic.

Furthermore, filmmakers do a good job of using some real game footage and real ESPN commentary by Kirk Herbstreit, Mike Golic and Todd Christensen from back in the day.

But despite the casting mistakes and bad NFL game scenes, “American Underdog” will motivate moviegoers because it encapsulates the American dream, not just sports dreams.