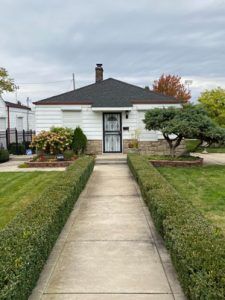 Michael Jackson’s music career began rehearsing in this house at 2300 Jackson Street in Gary, Ind. with his older brothers in The Jackson Five.

A poor Black boy growing up in Gary, Ind. in the 1960s becoming the “King of Pop” is definitely a story worth telling according to Hollywood.

As a result, filmmaker Antoine Fuqua, who directed “Emancipation,” “The Equalizer” and “Training Day” has received the assignment from Lionsgate of bringing Jackson’s illustrious career, which stretched over 40 years, to the big screen in the upcoming biopic “Michael.”

“Antoine is a perceptive and powerful filmmaker, and we feel very fortunate that he has chosen ‘Michael’ as his next project. His visionary storytelling skills and commitment to his craft will make ‘Michael’ an unforgettable film,” said Joe Drake, chairperson of Lionsgate Motion Picture Group.

Fuqua said, “The first films of my career were music videos, and I still feel that combining film and music are a deep part of who I am. For me, there is no artist with the power, the charisma, and the sheer musical genius of Michael Jackson. I was influenced to make music videos by watching his work—the first Black artist to play in heavy rotation on MTV. His music and those images are part of my worldview, and the chance to tell his story on the screen alongside his music was irresistible.”

Jackson’s rise to fame began as the main lead singer of The Jackson Five, whose first four nationally released singles (“I Want You Back,” “ABC,” “The Love You Save” and “I’ll Be There”) reached number one on the pop charts in 1969 and 1970.

The five brothers from Gary, Ind. barely missed the number one spot when their fifth single “Mama’s Pearl” reached number two on the pop charts.

The immediate success of The Jackson Five made them teen idols, which was practically unheard of for Black stars in the 1970s.

A cartoon, Christmas album and television specials like “Goin’ Back to Indiana” soon followed as Motown Records tried to capitalize on their fandom by tapping into revenue streams outside of music.

A teen magazine called Right On was formed to highlight the careers of the brothers, three (Michael, Jermaine Jackson and Jackie Jackson) of which began solo careers during the height of “Jackson mania.”

However, as the 1970s progressed the Jackson momentum began to wane as their bubblegum soul sound and cartoon image led to them losing credibility in an ever-changing musical landscape.

Additionally, Motown Records founder Berry Gordy would not allow the brothers to write and produce their own records, preferring the old assembly line approach to songwriting and producing that had turned Motown Records into Hitsville, U.S.A in the 1960s.

Upset that Motown allowed other artists like Marvin Gaye and Stevie Wonder to write and produce their own records, their father and manager Joe Jackson breached the group’s contract with Motown and signed a lucrative deal with CBS Records, which allowed the brothers a shot at writing and producing under the tutelage of songwriters/producers Leon Huff and Kenny Gamble of Philadelphia International Records.

Unfortunately, Motown Records retained the trademark of the name, The Jackson Five.

The group rechristened themselves as The Jacksons and replaced Jermaine (who was married to Gordy’s daughter Hazel) with youngest brother, Randy Jackson.

To give the group a boost, CBS even aired a variety television show around the entire family (sans Jermaine), including sisters Rebbie Jackson, LaToya Jackson and Janet Jackson.

Despite a couple of moderate hits with Gamble and Huff like “Enjoy Yourself” and “Show You the Way to Go,” The Jacksons did not hit paydirt until 1978, with their self-produced adult breakout album, “Destiny.”

The album featured the smash hit “Shake Your Body (Down to the Ground).”

Jackson followed the success of “Destiny” with a breakout role in the movie adaptation of the play “The Wiz,” an urban remake of “The Wizard of Oz,” which featured Diana Ross, Nipsey Russell and Richard Pryor.

If “Destiny” had not done the trick, “Off The Wall” made sure that no one would ever view Jackson as just a child star again.

By the turn of the 1980s, he was one of the biggest stars on the planet thanks to hits like “Rock With You,” “Don’t Stop Till You Get Enough” and “She’s Out of My Life.”

In 1980, he joined his brothers again for the “Triumph” album, which included “Can You Feel It” and “Lovely One.”

But by 1982, it had become clear that no group could contain his talents.

In November 1982, he released the biggest selling studio album of all time in “Thriller.”

Despite his talents and stature, MTV initially refused to play Jackson’s videos or many other videos from Black artists.

Therefore, CBS threatened MTV with removing all their artists’ videos from the platform.

As a result, Jackson receives credit for integrating the MTV airwaves.

Unfortunately, the meteoric level of fame that Jackson reached led to scandals, tabloid fodder and even criminal charges for alleged sexual molestation.

Jackson even received criticism from many in the Black community as his skin tone gradually became lighter.

Many believe Jackson had bleached his skin to appear White.

However, Jackson insisted in interviews that he suffered from a skin condition called vitiligo, which leads to white patches on the skin because of a loss of pigment.

John Logan (“Skyfall”) wrote the Jackson biopic, which will start shooting this year.