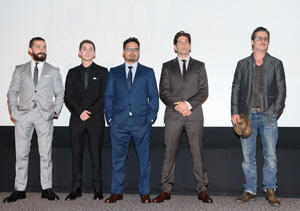 Ideals are Peaceful; History is Violent

Although America is the greatest country on the planet, some Americans have a tendency of sugarcoating history to make everything look patriotic and peaceful.

Slavery is whitewashed and the violence that was perpetrated on Native Americans is looked at as doing “God’s work.”

Schoolchildren are still protesting watered-downed history books that only encourage false patriotism and not a true account of history.

War is one of the horrors of life that Hollywood tries to romanticize at times.

While the heroes that served in the military should be honored and revered for their sacrifice, war should not and “Fury” does a splendid job of portraying just how brutal, heartless and violent World War II actually was.

Something should be obvious.  If a filmmaker teams Brad Pitt with Shia LaBeouf and Jon Bernthal then usually the result will be a remarkable film.

It is almost impossible to get a negative result with that amount of talent on the big screen and the stars of “Fury” definitely do not disappoint.

What is more remarkable is the fact that the aforementioned film veterans dim in comparison to the shining star of the film Logan Lerman, who plays the baby-faced typist Norman, who is forced to leave his clerical job and pick up a gun to fight for his country.

It is hard to imagine, but there was a time when the United States did not have the preeminent military on the planet.

At times, countries like Germany had better tanks, firepower and better soldiers than our American heroes.

Often, the military was outmanned but not always outclassed despite their deficiencies.

Don “Wardaddy” Collier (Pitt) is the best in the business.

In April 1945, he is charged with a dangerous mission to protect United States interests in Nazi Germany.

With a five-man crew, he accepts the dangerous mission despite the inexperience of some in the crew.

“Fury” shows the valor that many soldiers had but it also shows that not all soldiers deserve the heroic moniker.

Filmmaker David Ayer shows the internal warfare that goes on in the souls of soldiers, some who are devoutly religious like Boyd “Bible” Swan (LaBeouf) and some who are young, pure and innocent like Norman.

Furthermore, the film shows the effect that the war had on Germans who did not sympathize with the Nazi regime.

Their dead bodies were sometimes put on public display so other Germans could see what happened to so-called traitors and infidels.

“Fury” is a brutal, solemn, melancholy, overtly violent, realistic and excellent portrayal of World War II and some of the sacrifices made by the “greatest generation.”

Furthermore, Pitt is reaching that rarefied air with legends like Denzel Washington and Sidney Pointer as artists who do not make art for art’s sake, but to make a difference on the conscience of America and beyond.

His films make one think and if the person is a conscience individual, makes them think about history in a different light.

Thank God for filmmakers like Ayer and stars like Pitt who are determined to accurately portray the truth on the big screens when the educational system refuses to do so in textbooks.

Patriotism should be applauded, but when history is sugarcoated, descendants of true American heroes pay the price.