Film Review: ‘Emancipation’ Just Another Slavery Film Until It Isn’t 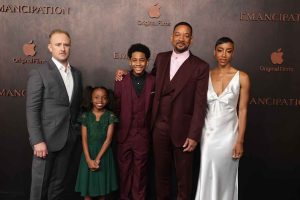 Many African-Americans have grown weary of Hollywood’s “obsession” with slave movies or Jim Crow movies.

And although “Emancipation” begins as just another slave film, it progresses into a vivid war movie with Will Smith delivering one of the most defiant performances in his Oscar-winning career.

Honestly, it must be horrific to live a life of bondage and brutality.

All the work slaves did was to fatten the pockets of their captors.

The only off days slaves had were holidays like Christmas and the Fourth of July.

On those days, the slaves could find a bit of a reprieve from the terror they had to endure the other 363 days of the year.

However, “Emancipation” touchingly depicts one area of life that some slaves got to enjoy, however briefly.

Many slaves “married” and had families like Peter (Smith) in “Emancipation.”

Despite the hatred they endured from their masters and overseers, many slaves could look forward to the love they received from their “spouse” and children.

Unfortunately, because slave masters only viewed their slaves as property, family members could be traded away and sold to the highest bidder at any time, destroying some families forever.

The film “Emancipation” begins with Peter praying over his family one last time.

In the same vein as a Harriet Tubman, Peter’s religious faith gives him a discernment over life, allowing him to keep his head held high until the Lord delivers him and his people to freedom.

When the overseers drag him out of his family’s dwelling place to sell him off to another owner, Peter begs his family to stay together no matter what.

His words prove prophetic in “Emancipation” as President Abraham Lincoln signs the Emancipation Proclamation in 1863, freeing all slaves from bondage.

Anyone living and breathing over the last couple of years knows that word of freedom did not reach all slaves until two years later on June 19, 1865, in Galveston, Texas.

Therefore, the Emancipation Proclamation was a like an unfulfilled contract that held no weight in the cruel and racist deep South.

In “Emancipation,” Peter is shipped to a Confederate work camp in Clinton, La. where he and other slaves are tasked with building railroads.

Seeing the swamp land in “Emancipation” just feels like true Louisiana back roads.

Furthermore, the haunting music in “Emancipation” will make moviegoers feel the fear that slaves had to endure, many for their entire lives.

Although many slavers viewed the African-American race as ignorant, many slaves had a genius more impressive than their so-called superior captors.

While laying the train tracks in Clinton, La., Peter and the other slaves overhear their captors talking about how President Lincoln had freed the slaves via the Emancipation Proclamation.

Nevertheless, that piece of paper did nothing to change the predicament of the African-American race in states like Louisiana.

As a result, the slaves at the work camp in Clinton, La. had to make a decision.

Play the waiting game even though they knew Lincoln had declared them free.

Continuing in a life of bondage could lead to death at any moment, especially since their captors knew they would not be in captivity for long.

Or they could fight and/or runaway for their freedom, which would certainly result in retribution for the “runners” as escaped slaves are called in “Emancipation.”

Regardless, Peter and the other men could face death no matter what decision they ultimately make in “Emancipation.”

The fighting dynamic in “Emancipation” makes the film a combination of “Harriet,” “Amistad” and “Glory.”

“Emancipation” begins with the words that 350,00 slaves in Louisiana had to take freedom or wait for the Union army to free them.

That description perfectly encapsulates the energy in “Emancipation.”

In “Emancipation,” Smith brilliantly delivers the most important performance of his career.

Smith’s Haitian accent and dialect as Peter in “Emancipation” is on point and much better than his maligned African accent in “Concussion.”

But it is Peter’s spirituality that stands out the most and his attempt to give hope to those around him, despite the brutality he endures.

While other slaves cannot understand why Peter’s God has not protected them and freed them like many preachers say He would, Peter’s faith is unwavering despite the circumstances.

That faith and discernment will be needed in “Emancipation” if Peter is ever able to reunite with his family and enjoy true freedom.

“Emancipation” is a stellar film.

The only concern is that “Emancipation” begins like the typical slave movie that many African-Americans would love to skip.

However, “Emancipation” is much more than that.

It shows the fight that many people of African descent had during slavery like “Amistad.”

It shows how faith got them closer to the Promised Land like “Harriet.”

And it shows that African-Americans did not sit and wait for freedom to just fall in their lap.

African-Americans fought to free themselves like in the film “Glory.”

More importantly, “Emancipation” will make the descendants of slaves think about their ancestors and what they had to do to reconnect with the family members that slavery had separated them from.

“Emancipation” is based on a true story.

But not only that, “Emancipation” will make many African-Americans think about the true stories of their family members who endured the horrors of slavery and lived long enough to experience that day of emancipation and jubilee.