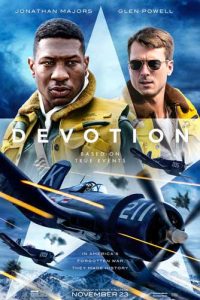 But Hollywood has not shown enough love to the heroes of the Korean War.

With “Devotion,” Hollywood produces a heartbreaking tale of heroism in the face of racism and gives much-needed appreciation to the heroes of the Korean War.

The film “Devotion” depicts a unique period in the history of the American military.

During World War II, many patriots desired to become a part of the military to give back to their country and the world during a time when Adolf Hitler’s treachery threatened the entire planet.

But when the age group that was slightly younger than the “Greatest Generation” became the age required to join the military, America found itself in peace time.

Sure, the Russians always posed a threat.

Therefore, soldiers and pilots had to remain on point.

But an imminent threat like the Nazis marching through Europe on a deadly rampage did not appear on the radar.

As a result, Navy pilots like Jesse Brown (Jonathan Majors) and Tom Hudner (Glen Powell) spend their time perfecting their craft and basically living the life of a civilian in Rhode Island.

Pilots and soldiers in “Devotion” see more action maintaining their family life or hoping for a family than action on the battlefield.

The most dangerous aspect of the pilots’ jobs is learning how to master the new planes given to them as the 1950s come around.

Pilots like Jesse who had mastered the World War II airplanes begin to worry that their skills will not be sufficient to master the new technology.

However, if they do not pass the skills test, they will never see any parts of the world other than the small Rhode Island town they call home.

But for Jesse, the skills test is not the only test he must pass.

In “Devotion,” Jesse is one of the best at his job and many in the Navy know it.

However, he deals with so much isolation and hatred that he begins doubting himself and his talent.

In “Devotion,” Jesse even yells at himself in the mirror.

The pilot has not lost his mind.

However, he yells the racial insults at himself that he has heard since he arrived on the planet.

It is almost a reminder to him that his failures and successes will not just be for him.

Like other African-American pioneers, whatever he does in his profession will reflect on the ability of everyone from his race that comes after him.

The only solace that Jesse gets is when he returns home to his wife Daisy Brown (Christina Jackson) and young daughter, Pam.

But even in the comforts of his own home, Jesse deals with discrimination because many of his lighter skinned neighbors seem upset that they must share a neighborhood with a family of a darker hue.

Because of all the insults that Jesse has had to endure, he has placed up a wall that seems impenetrable to anyone that does not have the last name Brown and does not have brown skin.

However, that tough exterior begins to soften when he befriends Tom.

In “Devotion,” Tom hears all the trepidation that people have at the fact that the Navy has an African-American pilot.

But even though Tom does not necessarily respond to all the negative comments made towards Jesse, one can see that he does not share the same prejudices as some of his fellow soldiers of the same racial group.

A friendship slowly develops between Tom and Jesse that might remind some movie buffs of the friendship between Gale Sayers (Billy Dee Williams) and Brian Piccolo (James Caan) in “Brian’s Song.”

Although Tom and Jesse never share the closeness and brotherly love that Brian and Gale did, the respect that the two have for each other is obvious.

Sensing on the growing friendship between her husband and his colleague, Daisy lets Tom know that she wants him to look after Jesse because she will not be able to once they get deployed.

The movie “Devotion” has a double meaning to an extent.

Obviously, if people put their lives on the line for their country, they are devoted to the nation they call home.

But sometimes to make it out of a battle alive, the soldiers must be devoted to each other.

With the words of Daisy echoing in the back of his mind, Tom takes his devotion to Jesse seriously whether it is on the battlefield or battling more racism in foreign lands.

Because of his family life, Jesse is devoted to more than just country and his fellow soldiers.

He is devoted to returning home to see his wife and daughter once again.

In “Devotion,” Jesse sleeps with their pictures above his head.

He even writes Daisy once a week while he is deployed.

Unfortunately, all the devotion can become bittersweet when it comes to warfare.

The movie “Devotion” does take too long to get going.

The gist of the film lies with the relationship between Tom and Jesse.

But because of Jesse’s reluctance to open up, that takes a minute to develop.

But once it does, it is well worth it.

Honestly, with talent like Majors and Powell, “Devotion” had to eventually shine.

However, Powell might hear the typecast word because his role in “Top Gun: Maverick” opposite Tom Cruise is like his role in “Devotion.”

But thankfully, “Devotion” shines a bright light on some true Korean War heroes and a war that is often forgotten in the minds of many people.