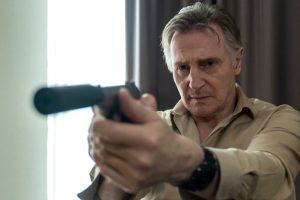 One sometimes knows what to expect from Liam Neeson in recent memory.

Recent Neeson movies will include a lot of violence, killing and action.

But sometimes Neeson plays the adversary to those bad guys.

However, Neeson has done far too much to receive the label of typecast.

Anyone who stars as Oskar Schindler in “Schindler’s List” cannot get labeled as one type of actor because the role of a Holocaust hero cannot be compared to an action movie hero or antihero.

But in “Memory,” Neeson’s portrayal of contract killer Alex Lewis will not do much to remove that typecast label from the minds of some moviegoers who have come to accept these types of roles from the Irish actor.

Hollywood is typecast as well, sometimes regurgitating the same plotlines in numerous movies.

That is not always Hollywood’s fault because it is almost impossible to come up with totally unique ideas for every movie.

But unfortunately, when Hollywood puts out similar storylines, it becomes difficult not to compare current movies from movies of the past.

In 2004, Tom Cruise and Jamie Foxx starred in “Collateral,” one of the best movies in the past two decades that focused on a contract killer and the people attempting to stop him from committing mass carnage.

While “Collateral” came across as equally cool, gangster and authentic, “Memory” comes off as a sometimes poorly acted knock-off of the real thing.

However, that does not make “Memory” a horrible movie.

It is just that others have done it much better.

In Guadalajara, Mexico, Alex arrives at a hospital in scrubs, looking like he is ready for another day of work in the healthcare field.

At the same time, a car speeds by Alex in the parking garage of the same hospital.

Two people hop out of the speeding car, as Alex enters the building.

As the two men, one carrying a bouquet of flowers, flirt with a hospital employee at the front desk, one eventually visits the room of his sick mother.

Although his mother cannot talk because of the mask covering her face, she is fully aware of what is happening in her room.

“Nurse” Alex kills her son right in front of her face, as she is unable to make a sound to alert the hospital staff.

While nurses often do everything to keep people alive and healthy, Alex, the contract killer, is the anti-nurse, doing whatever it takes to kill the people he is paid to eliminate.

Despite the skill that he possesses, Alex wants to retire from his line of work.

However, money talks and B.S. walks.

When he is given such a large amount of money to kill off some people in El Paso, Texas, he is almost forced to take on more jobs.

Besides, who has ever heard of a retired contract killer?

Above the border in El Paso, Texas, FBI agent Vincent Serra (Guy Pearce) is determined to break up a child sex trafficking ring that stretches from Mexico to the United States.

In “Memory,” Papa Leon’s (Antonio Jaramillo) child sex ring is so brutal that he has his own 13-year-old daughter Beatriz Leon (Mia Sanchez) turning tricks for johns.

Vincent is so dedicated to ending Papa Leon’s operation that he poses as a john to get more inf0rmation about Papa Leon’s sex trafficking ring.

He links up with Papa Leon to buy services from Beatriz.

But when things go seriously wrong during his meeting with Beatriz, it throws off the entire FBI investigation into Papa Leon’s criminal enterprise.

In “Memory,” Vincent’s boss at the FBI (Ray Fearon) decides to shut down the operation.

What Vincent discovers in “Memory” from pursuing the case, despite the wishes of his superiors, uncovers a criminal enterprise more powerful and complex than he could have ever imagined.

And while Vincent tries to bust the case open, Alex tries to make sure that anyone that can expose the truth in “Memory,” gets removed from people’s memory via a bullet.

“Memory” is not a horrible movie.

It just might not be worth the price of admission.

“Memory” is more like a movie that people wait to see when it reaches streaming services or cable television.

Some of the acting performances leave much to be desired.

And some of the dialogue seems a little awkward and unrealistic.

Most importantly, the meaning behind the movie’s names does not add much to the storyline.

But a contract killer with advanced Alzheimer’s is a little bit much.

In “Memory,” Alex’s memory is so bad that he must write notes to himself on his arm.

It seems that a contract killer with memory issues, who writes important details on his own arm, would be easy to apprehend.

A killer with Alzheimer’s would probably tell on themselves long before authorities figure out those murder cases.

But despite the awkwardness of the plot and the dialogue, ‘Memory” still boasts of bona fide movie stars like Pearce and Neeson.

And despite falling victim to the recent Neeson formula, “Memory” is still halfway decent, if viewed in the comfort of one’s home and not in theaters.