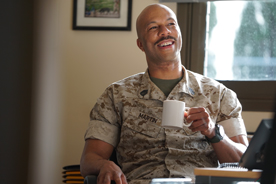 “Meagan Leavey” does not shine because it’s innovative or surprising.

The film “Megan Leavey” shines because it is heroic, heartfelt and harrowing simultaneously.

Thanks to the trailer, the ending of “Meagan Leavey” is well known before entering the theater.

But the dangers faced by American soldiers and the bonds they form just to survive war is inspirational and worth the price of admission.

The actual Megan Leavey (Kate Mara, “House of Cards”) is the typical lost child according to the movie.

She comes from a dysfunctional and fractured home, void of much love and support.

Her jobs do not provide her with satisfaction or enough money.

And she desperately wants to distance herself from her family.

Like many with limited options, Megan decides the military will provide her with an opportunity to spread her wings and make it on her own.

Unfortunately for Megan, the military is initially just as rough as her life back home.

The new marine still gets into trouble for such things as relieving herself in public.

She struggles to make it as a soldier until she finally finds her purpose.

Until she joined the military, Megan had trouble developing bonds with people because of her troubled family life.

However, when Megan begins working with bomb sniffing dogs, she finally finds companionship and a cause in life.

Unfortunately, when her service is up and the dog’s service is up, it becomes nearly impossible for her to reunite with the dog despite her intentions.

The dog is the only thing that makes Megan whole, but the service believes her dog is unadoptable.

Therefore, Megan begins a crusade to bring her companion home to New York to live with her forever.

Even when Megan actually bonds with people, those bonds are not solid because of the uncertainty and volatility of war.

Servicemen have to deal with the harsh reality that loved-ones can be snatched from their lives at any minute, especially in this era of terrorism.

Ultimately, “Megan Leavey” succeeds because it is a heartbreaking and heartwarming story at the same time.

Mara is slowly working her way up the totem pole in Hollywood as one of the most respected actresses in the game.

While her title role in  “Meagan Leavey” will not be iconic as her role as Zoe Barnes on Netflix’s “House of Cards” it is still just as formidable.

On “House of Cards,” Mara showed only her strong and sensual side.

However, in “Meagan Leavey,” Mara is able to show more emotions like dysfunction and vulnerability.

Rapper Common also does an adequate but not great job as her superior, Gunny Martin.

His best role to date has been as civil rights leader James Bevel in “Selma” and it will be difficult to surpass such an important role anytime soon.

However, the real star of the film is the dog.

Many know of the life-saving jobs of American soldiers.

However, fewer people might know about the talented dogs trained to sniff out explosives in order to save lives and prevent catastrophic destruction.

The film also shines because of the in your face explosions.

But the movie mainly shines because of the real person that is Megan who is someone that people can relate to and be inspired by.