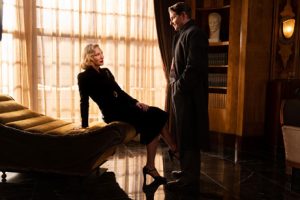 Others not so much.

“Nightmare Alley” presents the hustler’s tale in a much different way than “Licorice Pizza,” which hits theaters on Dec. 25.

However, both present somewhat of a cautionary tale, though the filmmaking and storyline could not be more drastically different.

In “Nightmare Alley,” Stanton Carlisle (Bradley Cooper) is a troubled soul with some dark secrets in his past.

“Nightmare Alley” begins as Stanton drops a body under the floorboard of a home, then watches as flames engulf the old frame house.

Although the fire might represent the burning of past pain in Stan’s life, his future prospects do not seem much cooler either.

The vagabond stumbles upon a local carnival and immediately his hustler’s nature grabs the attention of the carnival organizers.

The jobs are nothing extravagant, but it keeps some coins in Stan’s pockets and keeps food on his table.

However, the entire time Stan is doing menial jobs for Clem in “Nightmare Alley” he is soaking up game like any true hustler would in those circumstances.

In “Nightmare Alley,” Stan begins plotting a way to take what he has learned from people like Clem, Pete (David Strathairn) and Zeena the Seer (Toni Collete) and take their game to the next level.

Pete and Zeena the Seer have developed a way to hustle people out of money in “Nightmare Alley” by telling their fortune and future.

The pair have mastered a way of knowing someone’s past so that they can manipulate the unsuspecting participant into giving them money with fake tales of their future.

Unfortunately, Pete has begun to slip in his fortune telling job because of his addiction to alcohol, a substance that Stan never touches.

As a result of Pete’s constant inebriation, Stan begins learning more about the fortune telling hustle behind Pete’s back, often when he is knocked out unconscious from drinking so much alcohol.

In “Nightmare Alley,” Molly has her own act at the carnival.

However, Stan finds a way to take her act to the next level also because of his talents in art, design and construction.

Although Stan has developed a reputation throughout the festival circuit as a charmer and lady’s man, he has different plans for Molly.

Stan sees a future for himself and Molly, personally and professionally.

Although carnival employees like Bruno (Ron Perlman) do not take too kindly to Stan’s romantic overtures to Molly, the young lady falls for him anyway.

In “Nightmare Alley,” Stan and Molly run off from the country carnival they worked at and turn their ideas into a dream come true.

Instead of showcasing their act at county fairs and carnivals, Stan and Molly graduate to hotel ballrooms and gowns and tuxedos.

Unfortunately, many hustlers take their hustle too far.

Many do not know when to stop while ahead.

And many meet their match when it comes to hustling.

The questions in “Nightmare Alley” are will Stan meet his match and how will he respond if he ever met his equal on the hustling circuit?

“Nightmare Alley” is definitely worth the price of admission from a performance and filmmaking standpoint.

How can a movie fan go wrong with a film starring Cooper, Dafoe, Richard Jenkins and Cate Blanchett, four of the most accomplished actors in the game?

Some critics even see “Nightmare Alley” as some of Cooper finest work, even Oscar worthy.

While Cooper definitely brings his A-game, his past stellar resume should make his performance in “Nightmare Alley” fall a little beneath his best.

After all, Cooper has appeared in such legendary films as “A Star is Born,” “Silver Linings Playbook,” “American Hustle” and “American Sniper.”

Therefore, Cooper would have had to deliver one heck of a performance in “Nightmare Alley” to top those past performances.

In “Nightmare Alley,” Blanchett does her thing too, obviously.

Blanchett plays the character Dr. Lillith Ritter with an intelligence and seduction that hides her true intent.

Many men have a hustler’s spirit.

But wise men know that an intelligent and beautiful woman can con any man out of anything at any time because of their aura and sex appeal.

But what “Nightmare Alley” has going for it is the style of the film, which is a period piece.

If the movie is not unique enough, it gets labeled formulaic.

However, if the film is too unique, it gets labeled as weird.

“Nightmare Alley” finds a good way to balance its eccentricities without becoming too strange.

Furthermore, “Nightmare Alley” has enough twists and turns that will come out of left field, ensuring that it does not fall into the Hollywood predictability trap.

While “Nightmare Alley” is a period piece and a suspense film, it is mostly a cautionary tale.

People might let another person hustle them once or twice before they figure out the hustle.

But once the hustle is discovered, it might be best to hustle, or high tail it, out of town because there is one thing that all people hate.

That is to be made a fool of by a hustler and huckster.