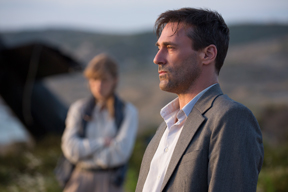 Intense and Interesting, But Not Great

Former U.S. diplomat Mason Skiles (Jon Hamm) wants nothing to do with the Lebanese city of Beirut.

The last time the former diplomat stepped foot in Beirut in 1972, his wife got assassinated, his future adopted son got kidnapped and his entire life as he knew it turned upside down.

The lead up to his wife’s assassination still remains hard for him to come to grips with.

Friend and fellow United States diplomat Cal (Mark Pellegrino) informs him that he must take his future son Karim Abu Jamal because Karim’s older brother is a seasoned terrorist.

Doubting the validity of Cal’s accusations, Mason cannot believe it because Karim told him and his wife that he had no family members left and that he was all along in the city of Beirut.

The Skiles family has taken Karim in, educated him and “civilized” him and they refuse to let him go without a fight.

Unfortunately, a fight is just what the Skiles family, and the rest of the American diplomats at their home in Lebanon get, when terrorist open fire on the home, killing Mason’s wife and running off with his future son, Karim.

Mason retires from the exciting life of foreign political diplomacy and returns to the United States as a labor union mediator and negotiator.

However, the simpler life has not made life simpler.

He has developed a drinking problem.

He has distanced himself from his friends from Beirut.

And he has left the Middle East in his rearview mirror.

However, when an old friend, unsurprisingly finds Mason alone at a bar getting plastered, he approaches him with a proposition.

The United States government wants him to return to Beirut to give some guest lectures at various colleges.

Although Mason does not have a passport and time to prepare, he is informed that the government has taken care of all of his possible concerns.

If he accepts the assignment, his plane will leave that night.

If he does not accept the assignment, the conversation with his old friend at the bar never actually happened.

Mason does accept, and what he finds is that civil war between the religions of Lebanon has destroyed the city of Beirut and the United States government finds itself in a precarious position.

Fortunately or unfortunately, Mason is one of the only people on Earth skilled enough to get America out of its dangerous predicament.

The movie “Beirut” is equally intense and interesting, but not necessarily fascinating.

While “Beirut” is definitely on time, considering the current global political climate, it is no more unique than watching cable news like CNN or Fox News.

The acting in the film is on-point, which is to be expected with actors like Hamm and Rosumund Pike.

But the film has already received criticism in Lebanon for not featuring any Lebanese actors and for portraying the country and Muslims in a stereotypically negative light.

Calls for boycotts of the film in Lebanon have erupted since the trailer was released.

It remains to be seen whether a country and a religion not wanting anything to do with this film will have an adverse impact at the box office.