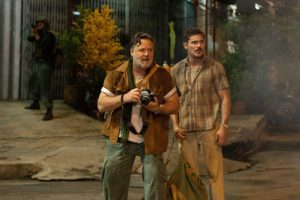 (“The Greatest Beer Run Ever” trailer courtesy of Apple TV+)

Have you ever known a friend that had a good heart but did not make the best decisions?

Did they metaphorically ride a smaller bus to school while you rode in a slightly bigger bus?

In “The Greatest Beer Run Ever,” which is a solid film, Chickie (Zac Efron, “Baywatch’) shows how even people with the best motives can make decisions that put everyone in danger.

But even those horrible decisions can sometimes lead to life-altering experiences that changes the course of one’s life forever.

“The Greatest Beer Run Ever” takes place as America finds itself amid the Vietnam War.

The Vietnam War divided the United States in ways that other wars did not in previous generations.

Because of the mass media’s coverage of the carnage in Vietnam, many young Americans refused to accept the narrative that politicians and military officials fed them in the late 1960s.

As a result, many began questioning authority in a way that would have been blasphemous for the Greatest Generation during World War II.

In “The Greatest Beer Run Ever,” Vietnam War coverage even begins dividing families as Chickie’s relationship with his sister hits a rough patch once she joins the anti-war movement.

Chickie cannot understand how real Americans could take to the streets and protest a war when they probably have friends and family members overseas fighting for their rights.

However, what rights are being protected by having American soldiers fighting in Vietnam?

Despite opposition to the war spreading throughout Chickie’s hometown of New York City, he does not want his friends and neighbors coming home from war and the first thing they see is American protestors criticizing their sacrifices in Vietnam.

After attending wakes, funerals and protests, Chickie decides to travel to Vietnam to give his friends from the Inwood neighborhood in Manhattan, N.Y. a little taste of the old neighborhood.

In “The Greatest Beer Run Ever,” Chickie hops on a ship to travel thousands of miles to deliver American-made beer to his buddies on the frontline of a brutal war zone.

Never mind the fact that there is beer in Vietnam.

And forget the fact that soldiers can get American-made beer in Vietnam too.

For some strange reason, Chickie believes that it will uplift his buddies’ spirits if they could get hot beer from a familiar face even though they probably are more concerned with dodging bullets and avoiding landmines.

But instead of just uplifting his buddies, Chickie’s experience in “The Greatest Run Ever” leads him to lifting his consciousness when it comes to blind patriotism and believing everything the government says.

While the plot of “The Greatest Beer Run Ever” would be unbelievable if the movie was not based on a true story, Chickie’s transformation (or character arc) makes it a coming-of-age story for someone that should have already come of age years earlier.

In “The Greatest Beer Run Ever,” Chickie epitomizes the term, screw up.

Chickie is almost in his mid-20s, but he has still not begun to take adult life seriously.

In “The Greatest Beer Run Ever,” Chickie is the epitome of an immature college fraternity member, even though he never even graduated from high school.

He spends his nights drinking beers with his buddies even though he never actually pays for the beer.

His tab is sky high at multiple bars in Inwood.

Some bars will not even let him on the premises, while others will not take his order.

Therefore, he relies on his buddies to pay for his alcohol habit.

Once his daily drinking is done, he sleeps the entire day even as his parents beg him to get his life in order.

Because of his childish behavior, very few of his friends even take him seriously when he tells them he wants to visit the war zone to deliver some hometown brews to the boys on the frontline.

However, with his family’s disappointment in his ear and mothers of soldiers visiting him to drop off care packages for their boys overseas, Chickie ignores the pleas of his sister and heads off to bring some joy to the soldiers on the frontline.

What Chickie finds in Vietnam changes him forever

As a result, his outlook on war, government and journalism is forever altered as the war changes his personality just as much as it changes the personalities of the soldiers fighting the war and the war correspondents covering the conflict.

Efron, known for such movies as “High School Musical” and its sequel, shows some growth and maturity with “The Greatest Beer Run Ever,” as to be expected for an actor in his thirties.

But most impressive for Efron is that he knows himself as an actor and a person.

He just does not go for the 100 percent serious role with “The Greatest Beer Run Ever” like he has in serious roles in the past from “Parkland” to “Extremely Wicked, Shockingly Evil and Vile.”

In “The Greatest Beer Run Ever,” Efron mixes the serious with the simple and does it solidly.

Nevertheless, the standout performance in “The Greatest Beer Run Ever” belongs to Russell Crowe, who plays the journalist Coates.

Journalists will respect Crowe’s performance because many journalists have heard the criticism that Chickie has for journalism a million times.

Chickie wants Coates to explain why reporters only report the negative news.

But as Coates tells Chickie, how can a reporter tell positive stories when they are surrounded by nothing by negative happenings?

So, real journalists simply report the truth even if it destroys a naïve person’s view of their country.

Although the war scenes in “The Greatest Beer Run Ever” are adequate, the movie kind of stalls in the middle.

But despite the stagnant parts of “The Greatest Beer Run Ever,” many people will also relate to Chickie because they probably can pinpoint the time in a friend’s life with reality replaced naivete.