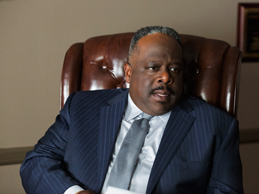 Cedric Kyles (aka Cedric the Entertainer) stars as a pastor in “First Reformed” (Photo courtesy of A24 Films).

In “First Reformed,” Cedric Kyles (aka Cedric the Entertainer) tells Rev. Toller (Ethan Hawke) that every pastor needs a pastor.

That is funny because I often hear my pastor Ralph Douglas West of The Church Without Walls in Houston say the same thing.

Pastors take such a beating that critics forget that they are human beings experiencing the same trauma and drama that non-clergy face on a daily basis.

Often their needs are not met because they spend the majority of their time tending to the needs of their flock.

That neglect, and the negative results, is captured exquisitely in “First Reformed.”

But unfortunately, the momentum gained throughout “First Reformed” comes to a screeching halt because of a subpar climax.

“First Reformed” represents the crossroads that the Christian Church often finds itself.

Mega-churches like Abundant Life, pastored by Kyles’ character, is thriving and operating like a multi-million dollar company, for better or worse.

On the contrary, older neighborhood churches like First Reformed are struggling to stay afloat with dwindling membership and deteriorating buildings.

When Rev. Toller is asked to mentor Michael (Philip Ettinger), a troubled young father to be, he does not hesitate to assist because he does not necessarily have the same busy schedule as his colleagues at Abundant Life.

Michael is an expectant father who does not expect his future son or daughter to have a much of a world to grow up in.

The soon-to-be father is an environmental activist who has spent time in jail for protesting the government’s alleged neglect of the planet.

Michael desperately wants his wife, Mary (Amanda Seyfried) to have an abortion.

However, his wife, who shares his environmental views, does not share his desire to abort their baby.

Toller’s counseling sessions with Michael bring out the fact that the pastor needs counseling himself.

Like many men, and possibly pastors who try to put on a façade of machismo, Toller decides to keep a daily journal of all of his pain and despair instead of seeking the help of a counselor or pastor himself.

And instead of the pastor’s views rubbing off on Michael, the pastor begins to be negatively influenced by Michael.

The crossroads that Rev. Toller faces comes at the worst possible time for First Reformed Church.

Not only is First Reformed Church a small neighborhood church, it is a historic church that is more known for tourism than teaching the gospel.

First Reformed Church is in the midst of celebrating its 25oth anniversary with a big celebration with politicians, local businesspeople and friends from Abundant Life Church.

The question is will Hawke’s problems cause problems for the 250th anniversary celebration, or will the pastor get the help that he needs to weather his own storms in life?

The pastor of First Reformed has a lot of tragic experiences from his past that have not been dealt with.

His friends just want him to deal with that tragedy before it leads to even more tragedy for the pastor.

“First Reformed” is refreshing because of its realistic and sensitive portrayal of the life and struggles of Christians, especially pastors.

Too often, Hollywood seems to poke fun at faith as if it is a laughing matter, and something that intelligent people do not need or believe in.

In Hollywood, Christians are often portrayed as weirdoes who do not fit into the real world because they live by archaic rules that oppress and offend, which is not true.

Often, Christians deal with the same questions and dilemmas that non-Christians grapple with.

If God loves the world, why does he allow so many calamities in the world?

Is Christianity really a week religion because it requires its followers to remain meek and to turn the other cheek?

Why do bad things constantly happen to good people, especially people who believe in Christ?

What is the meaning or purpose in life?

What is the future of the church?

Toller and Kyles’ character give a serious and impassioned portrayal of the despair that some pastors feel even though they have to remain hopeful and faithful because they have an entire flock that follows their lead.

Many pastors are not allowed to be human beings who are not perfect because they have to exemplify the perfection of Jesus Christ.

That reality can lead to self-destructive behavior that is often more dangerous for them than it is for non-clergy, because many are forced to keep their sins behind close doors out of fear of judgment.

Hawke does a great job of exuding those emotions, while also holding in many of his emotions like men stereotypically do as not to appear weak.

Cedric the Entertainer is a good dramatic actor, but in “First Reformed” he is just adequate.

He is believable as a preacher and has portrayed one before like in his hilarious performance in “Kingdom Come.”

Ettinger is also great in his performance as Michael.

His anxiety and fear for the world is so believable that he might change people’s opinions on environmental issues in real life.

Despite the fine performances, “First Reformed” ends too abruptly.

The ending could have given moviegoers so much more considering all of the drama leading up to the conclusion.

“First Reformed’s” ending stops the movie from being better than good.

Paul Schrader’s script excelled throughout, but fell off of a cliff at the end.

But thanks to Schrader, Hollywood finally has a secular film that portrays the drama and trauma that Christians and their pastors experience without making light of faith and making fun of the faithful.