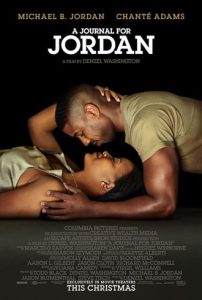 At an advance screening of “A Journal for Jordan” in Houston on Dec. 13, moviegoers cheered and some even shed tears as they walked out of the packed theater.

That range of emotion is what many artists dream of when they choose to tell a story whether on the big screen, on stage or in a book.

The Denzel Washington-directed “A Journal for Jordan” achieved the goal of many artists with a heartfelt tribute to fatherhood that will make strong dads proud and military families yearn for the lost loved-one who made the ultimate sacrifice for their country.

In “A Journal for Jordan,” Charles Monroe King (Michael B. Jordan) has made the Army his entire life.

He has a great relationship with his parents.

However, he shares an even closer bond with his military mentor and drill sergeant Mr. Canedy (Robert Wisdom) and his wife Mrs. Canedy (Tamara Tunie).

Charles has gotten so close to the Canedy family that he knows everything about Mr. Canedy’s two daughters because all the drill sergeant talks about is his three kids.

So when Dana (Chante Adams) visits her parents and finds a strange man in her parents’ house hanging a painting, she is totally shocked.

But Charles is not.

In fact, Charles spends more time at the Canedy home than the actual Canedy children.

The children either smoke marijuana to deal with the stress of having parents who have seen the spark die in their romance or stay at hotels when they are in town like Dana to limit their interaction.

Although Dana tries to limit the time spent with her parents, that does not stop them from trying to pry into her non-existent love life or play matchmaker for their two single daughters.

As a matter of fact, it is Mr. Canedy’s advice to Dana that gets her talking to Charles in the first place.

In “A Journal for Jordan,” an immediate connection is formed between Charles and Dana.

Unfortunately, Charles is not based anywhere near New York City where Dana lives, while working as a journalist for the New York Times.

To complicate matters even more, Charles is not exactly single.

The girl dad is going through a divorce to a woman he married when was very young and immature.

However, the divorce is not totally complete when he falls for the beautiful Dana.

But when Charles is finally single, he visits the “Big Apple” for the first time.

Although the two lovebirds take it slow, it is clear to everyone around Dana that Charles is the one.

And if they can finally get their living situation together, and stop the long-distance relationship thing, the two could have a future together.

There is only one chink in Charles’ armor.

Although he definitely loves Dana, Charles has the same love for his fellow soldiers and his country.

That dichotomy is the only thing that can prevent Dana and Charles from their happily ever after.

Unfortunately, like many people alive in 2001, the terrorist attacks of Sept. 11 changed everything.

People across the country stopped taking life for granted.

Many people stopped putting off for tomorrow what they could accomplish today.

Sept. 11 hit Dana and Charles even harder than most because Dana was at work at the New York Times when the hijacked airplanes hit the World Trade Center.

The fact that Charles did not live in New York and could not protect his woman had to weigh on him heavily.

With that sense of urgency in mind, Dana and Charles decide to get married and start a family as soon as possible.

But as soon as the young couple has their house in order, up jumps the devil.

In “A Journal for Jordan,” Charles receives his deployment orders before Dana gives birth to young Jordan, putting the family’s plans in peril.

The couple begins getting their affairs in order just in case the unexpected occurs in “A Journal for Jordan.”

As a gift, Dana gives Charles a blank journal for fathers so that he can write everything he wants to tell Jordan and is unable to because of the realities of war.

In “A Journal for Jordan,” the diary of sorts becomes like a Bible for Jordan (Jalon Christian) as he constantly looks to it for guidance in life.

First and foremost, “A Journal for Jordan” is not suspenseful or something that will shock moviegoers.

Many know what to expect from “A Journal for Jordan” because of the storyline and the fact that Washington directed the film.

When Washington signs on to direct a film like “Antwone Fisher,” “The Great Debaters” and even to a degree “Fences,” he often highlights positive and strong Black men and fathers.

“A Journal for Jordan” does not stray too far from the Washington directorial formula.

The films often are tearjerkers and “A Journal for Jordan” definitely fits the bill.

The only downside of “A Journal for Jordan” is the film spends a little too much time on Dana and Charles’ initial courtship.

More time should have been spent on Charles’ deployment to the Middle East.

However, moviegoers will not come out on Christmas day to see a war movie.

Many will want to see a feel-good movie.

Some will even want to see a tearjerker.

Moviegoers will get a feel-good film, a tearjerker and much more with “A Journal for Jordan.”