Film Review: ‘Sidney’ Exudes Self-Confidence, Knowledge of Self and Dignity 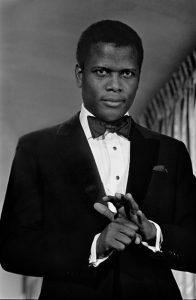 RegalMag.com got its name from the fact the African-American men descend from African kings.

Kings do not lower themselves to fit in with the uncouth.

But they rise above any slights, misunderstandings or disrespect.

Academy Award winning actor Sidney Poitier epitomized the word regal, and the Apple TV+ documentary “Sidney” shows how knowing oneself and knowing one’s worth can help anyone rise above the ignorance and hatred that is determined to keep one down and in their so-called place.

To a logically thinking person, the fairytale story of Poitier’s career and life should not have happened.

He should not have lived much longer past infancy.

His health became so dire that his father left the house shortly after Poitier’s birth to find a shoebox to bury his newborn son in.

However, Poitier’s mother did not want to give up on her son without exhausting all possibilities.

Poitier’s mother visited a soothsayer, and she told her that not only was her son going to live to maturity.

But he was going to travel the world and become extremely famous.

Although Poitier obviously lived past infancy, when he began getting in trouble with some of his childhood friends, who were sent to reform school, his family made the decision to send him from The Bahamas to Miami to escape the trouble he was finding in his homeland.

To many foreigners, America has always represented the land of opportunity and freedom.

But for a Black man in the early 20th century, America represented the opposite of freedom, especially in the South.

Although Poitier’s parents worked as tomato farmers, they carried themselves like dignitaries.

The Poitiers always knew their worth and their significance.

Therefore, they taught all their children how important they were no matter what the outside world might tell them.

Because of his upbringing, Poitier always saw himself as a man, not just a Black man.

Unfortunately, America saw him as a Black man.

And to a racist America, Black meant inferiority and submission.

And when Poitier delivered a package to a White woman’s front door instead of the back door, like a good Black boy should, it led to a visit from the Ku Klux Klan and his escape to Harlem, N.Y.

While in Harlem working as a dishwasher without much formal education and a heavy Bahamian accent, Poitier began to pursue an acting career after learning about the American Negro Theater.

To prove himself as a competent actor, Poitier had to first master reading.

Then, he had to overcome his hard Bahamian accent.

Lastly, he had to overcome bigotry in Hollywood, which would only allow one Black movie star at a time.

Even then, that Black movie star had to demean himself or herself, and his or her community, by playing subservient roles like maids and buffoons like Academy Award winner Hattie McDaniel, Stepin Fetchit and Mantan Moreland.

But for Poitier, reducing himself to stereotypical roles just to get a paycheck would never be tolerated.

His parents would not allow him to present himself as anything less than a man and less than equal.

Because of that, his self-assuredness and strength changed the way Black men got portrayed in Hollywood as he refused to look down or bat his eyes for the White man.

And as proven in the film “In The Heat of the Night,” Poitier refused to turn the other cheek when disrespected physically by the White man.

His work eventually led to an Academy Award for “Lilies of the Field.”

And his strength led to more powerful roles for Black men and women during the Blaxploitation era.

Although Poitier’s style and grace fell out of favor in the Black community once the 1970s generation embraced the Black Power movement, very few could ever diminish his impact on the next couple of generations of Black talent.

The Apple TV+ documentary “Sidney,” directed by Reginald Hudlin and produced by Oprah Winfrey, is in essence a love song or tribute song to a pioneer that opened the door for every Black creative that came after his greatness first graced a movie screen or stage.

And coming after his passing, “Sidney” comes off as a huge acknowledgment of gratitude to a man that deserved his flowers in life, and in perpetuity.

In “Sidney,” Winfrey even sheds tears thinking about how Poitier’s life and career changed the trajectory of her own life.

The parallels between Winfrey and Poitier’s lives are striking.

Both came up very poor.

Both climbed the highest heights of fame.

Both received criticism from their own community for not being Black enough.

Both ignored the haters and continued pursuing their dreams and their greatness.

Both paved the way for so many others that came after them, especially those that look like them.

However, the profound moments of “Sidney” are not his professional accomplishments, which the press has documented for decades.

But “Sidney” wins because of the personal moments and thoughts shared by his widow, ex-wife and his daughters.

Like his father would tell him, the role of a father is a role that one should never abandon.

Another standout scene in “Sidney” is the 2002 Academy Awards when Poitier, Denzel Washington and Halle Berry all won Oscars.

Washington spoke about how he had spent his entire career chasing Poitier’s greatness.

Or should greatness be replaced with royalty?