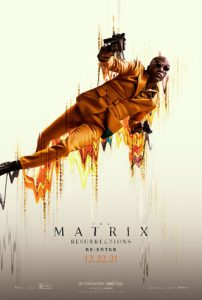 Has a dream ever seemed so vivid that you think it’s real life?

Has something ever happened in a dream that you could not differentiate fact from fiction?

What if the world created in “The Matrix” trilogy was just a video game created by someone with an enormous imagination?

What if the world created in “The Matrix” had died down years earlier, but the big bosses want a sequel?

Even if you did not agree to do the sequel, the company would do it with or without you?

As a result, you are forced to go down memory lane.

However, the most important takeaway from “The Matrix Resurrections” is reclaiming lost relationships and the fact that real love cannot be contained, even when memories are fleeting.

Seeing the great Keanu Reeves reprise his role as Neo in “The Matrix Resurrections” raised the excitement level of super fans even more.

But seeing Trinity (Carrie-Ann Moss) return to “The Matrix Resurrections” took the excitement over the top for many.

In “The Matrix Resurrections,” Neo remembers everything about Trinity.

But she does not share the same memories of him?

In “The Matrix Resurrections,” Neo sees Trinity regularly at a local coffee shop.

However, he is apprehensive to approach her.

Even when he does finally speak to her, he does not speak of his memories of her.

Instead, Neo and Trinity speak about Neo’s popular video game and how Trinity’s children love to play the game.

Trinity even believes that one of the characters in the video game is based off her for some reason.

Although Trinity does not “know” Neo, she believes the video game character resembles her physically and has some of her same interests like an affinity for motorcycles.

While Moss returns for “The Matrix Resurrections,” unfortunately Laurence Fishbourne does not reprise his role as Morpheus in the fourth installment of “The Matrix.”

However, no fear because Yahya Abdul-Mateen II is here to pick up the slack in “The Matrix Resurrections.”

Mateen brings a millennium-style swag to the role of Morpheus, and he does his thing to the next level.

The New Orleans native might not be a household name in pop culture YET.

However, he definitely is well-known amongst those who value cinematic excellence.

Abdul-Mateen has the range to play Morpheus in “The Matrix Resurrections,” Black Panther Party leader Bobby Seale in “The Trial of the Chicago 7,” and roles in horror films like “Candyman” and “Us.”

Therefore, seeing Mateen take the place of a legend like Fishbourne in “The Matrix Resurrections” is like tipping the cap or the passing of the torch from one generation of great thespians to the next.

The makeup department deserves some love for “The Matrix Resurrections.”

Jada Pinkett-Smith appears as the elderly Niobe, and she is almost unrecognizable.

Furthermore, the legendary Telma Hopkins stars as Freya in “The Matrix Resurrections.”

So shout out to the casting department for showing love to one of the most diverse talents in Hollywood in Hopkins.

While fans will come for the action, Reeves and Moss, “The Matrix Resurrections” will make moviegoers and streamers ponder deep issues like free will or destiny.

Do we really control the outcome of our lives like what course our career takes or who we end up with relationship-wise?

Or is all that already predetermined for us before our conception?

One choice that “The Matrix Resurrections” does present is whether to take the red pill or the blue pill.

The fourth installment of the franchise does present its twists and turns and unpredictable character arcs.

Fans will have to watch on Dec. 22 to decipher the meaning of the aforementioned statement, obviously.

No spoilers will be leaked by RegalMag.com.

Unfortunately, casual fans of “The Matrix” will have to do some research before undertaking “The Matrix Resurrections.”

As a result, please check out the first three films so you will not get lost in the sauce.

But even if a movie fan has not seen “The Matrix” in years or decades, the movie’s visuals are so spectacular that they will still find enjoyment from the fourth installment of the franchise.

Luckily, there might be a fifth installment of the popular franchise in the near future.

Reeves said that a fifth installment is up to director Lana Wachowski.

But if Wachowski is in so is Reeves when it comes to another “Matrix” movie.

Reeves said, “I mean, if she wanted to do another story and wanted to include me, I would be honored and grateful. And I would like to see what happens to Trinity and Neo—and the world.”

However, Abdul-Mateen has not committed to a fifth installment.

He said, “If I’m honest, I think that before I even get into those conversations, I just want to see this film come out and to see how this film resonates with audiences.”

Abdul-Mateen continued, “In terms of where you go next, I think that would depend a lot on how it’s received by the world, and how its digested, and then to say, based on that, is there a need to continue on or did the film do what it was intended to do?”