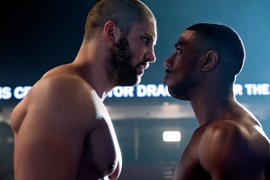 Many boxers come from hardscrabble backgrounds and they use the sport of boxing to fight their way out of poverty, danger and dysfunction.

To an extent, Adonis experienced that hardscrabble life as a child, going from group home to group home.

But he also spends an extensive part of his childhood in luxury, after his late father’s widow comes and gets him from a group home to live with her after his biological mom, and his dad’s mistress, dies.

Despite growing up with a silver spoon, Adonis still has the heart of a fighter, thanks to his turbulent childhood and his father, regarded as arguably the greatest heavyweight of all time.

However, one would think that a person that has every material advantage in the world thanks to his rich late father would not put his body through such devastation just to receive a paycheck.

But Adonis does, showing that his affluent background did not take away his hunger in the ring.

In the first “Creed,” Adonis shocks the world by proving that he is more than just a famous name from a respected bloodline.

Adonis is the future of the light heavyweight division, and that future becomes reality in “Creed II.”

However, success brings a new set of problems that do not exist during adversity, as hungrier fighters aim for Adonis’ head, seeing the belt as their ticket to success, respect and riches.

Adonis’ desire to maintain respect and the light heavyweight belt in “Creed II” results in an amazing knockout of a film, which will have audiences cheering and jeering as if watching a real light heavyweight title bout.

If the upcoming heavyweight title bout between Deontay Wilder and Tyson Fury can produce half of the suspense as Creed vs. Drago, the once glamorous heavyweight boxing division will truly experience a much-needed renaissance.

“Creed II,” picks up a few years from where its predecessor left off.

Adonis still has the respect of the boxing world, but now has a longer resume.

He still has Bianca (Tessa Thompson, “Dear White People”) in his corner when it comes to life.

And he still has his “uncle” Rocky Balboa (Sylvester Stallone, “Escape Plan”) in his boxing corner.

What he still does not have is his prized old school Ford Mustang, which he lost in a bet to Danny “Stuntman” Wheeler (former light heavyweight champion Andre Ward) in “Creed.”

While his loss to Wheeler provided a much-needed eye-opening for Adonis, who up to that point had only participated in backroom brawls in Mexico, his skills in “Creed II” are much more advanced than he when he initially faced off with Wheeler in Little Duke’s (Wood Harris) neighborhood gym.

In his second bout with Wheeler, the light heavyweight belt is on the line in addition to the keys to his automobile.

Adonis wins both, the championship and his classic car.

But with the added respect in the ring comes added pressure and additional challenges.

In the Ukraine, Viktor Drago (Florian Munteanu), the son of Ivan Drago (Dolph Lundgren, “Rocky IV”), is making a name for himself on the boxing circuit by being a vicious and cold-blooded knock out artist like the young Mike Tyson and young George Foreman.

Although Viktor has not necessarily paid his dues, that does not stop his promoter Buddy Marcelle (Russell Hornsby, “The Hate U Give”) from coming to Philadelphia and challenging the new champion to a title bout.

Marcelle and the Drago boys know that another Creed vs. Drago fight will be hard for Adonis to turn down considering that his father Apollo Creed (Carl Weathers) lost his life in the ring fighting the Drago patriarch.

To make matters worse, Rocky was in Apollo’s corner that fatal night and could have prevented heartbreak by throwing in the towel and stopping the fight before tragedy struck.

Adonis has the heart of a lion and does not want to get punked by his Russian challenger.

But Viktor has several advantages over Adonis in “Creed II.”

Viktor is much bigger than Adonis.

Viktor is much faster than Adonis.

Viktor has a reach advantage over Adonis.

And Viktor seemingly has more power than anyone else on planet Earth.

Furthermore, Viktor and Ivan might posses more hunger than Adonis who is still basking in the limelight that comes from winning a boxing championship.

When Ivan lost to Rocky, he lost more than the belt.

In Russia, Ivan lost the respect of his country.

He lost his wife.

And he lost his life and riches.

Viktor has nothing to lose.

However, Adonis has everything to lose in “Creed II.”

If things do not go as planned for Adonis in “Creed II,” the illegitimate son of Apollo Creed could lose his livelihood or even worse, lose his life in the ring to a Drago just like his father over 30 years ago.

What ensues in “Creed II” is more suspenseful and spectacular than the Muhammad Ali vs. Joe Frazier trilogy of fights in the 1970s as well as the two Evander Holyfield vs. Mike Tyson bouts of the 1990s.

The fighting is so convincing in “Creed II” that all moviegoers will need are chicken wings, sliders, slices of pizza, adult beverages and their crew of friends and they will have a legitimate fight party right there in the movie theater.

But what is most amazing about “Creed II” is how the film balances the brutality in the ring with the tender moments outside of the ring.

Furthermore, “Creed II” shows how the stress in the ring can transfer over into one’s personal life and threaten a once happy home.

Going into “Creed II,” any “Rocky” or boxing fan will know the ultimate outcome.

But the way it goes down in the ring does provide some unpredictable moments in the Creed vs. Drago rivalry.

That reality in the ring shows how enigmatic boxing can actually turn out.

Sometimes, the outcome is predictable and sometimes fans have to expect the unexpected.