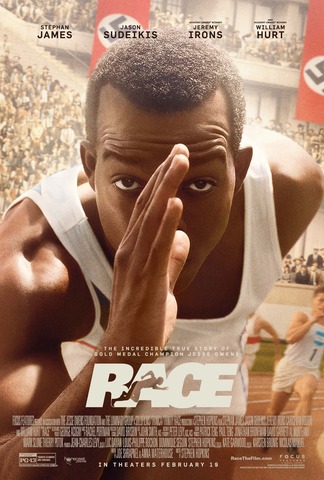 Imagine these insults hurled into your direction while trying to perform on the job.

Imagine being segregated from your peers and being ostracized at school because of the color of your skin.

Imagine not only having the pressure of winning a race in front of thousands of jeering spectators.

Imagine one of the spectators being one of the world’s most bigoted tyrants, Adolf Hitler.

And then imagine the entire Black community, worldwide, looking at you in an attempt to regain their pride and dignity in the midst of brutal oppression.

Olympic track star Jesse Owens (Stephan James) did not have to imagine it.  He lived that reality on a daily basis.

The new Owens biopic “Race” depicts that reality in a brutally honest and an extremely moving manner.

The movie could have easily become an ESPN SportsCenter-type special on the hero of the 1936 Olympic Games, but it delves deeper.

“Race” shows us Jesse Owens the man, spending as much time on his family life and relationship with his inspiring coach Larry Synder (Jason Sudeikis) as it does on his exploits on the track.

The film will leave moviegoers thinking that they really know the person behind the legendary persona.

The Stephen Hopkins-directed biopic depicts Owens, the unwed teenage father in an era in which premarital sex was extremely taboo.

“Race” depicts the Great Depression and how the harsh economic realities of the day had an extra hard effect on Black fathers like Jesse’s dad.

“Race” depicts the pressure that fame put on the young track star.

And “Race” depicts how his triumphant performances at the 1936 Olympics Games shattered Hitler’s belief of a superior Aryan race.

James is slowly creeping into the class of formidable young actors, which includes Michael B. Jordan, Nate Parker and Trai Byers.

With his performance as Owens, he shatters the high ceiling he set for himself as John Lewis in “Selma.”

Nevertheless, the standout performance belongs to Sudeikis, the White Ohio State University track coach who understands Owens’ struggles as a Black student on the Columbus, Ohio campus but refuses to let him use bigotry as an excuse to not attain greatness.

Thanks to the brilliant performances by the actors, the film achieves greatness like Owens did 80 years ago.

But just imagine if Owens did not achieve such greatness in Berlin.

Imagine if Joe Louis did not beat Max Schmeling in their second fight.

Imagine if Jackie Robinson could not maintain his composure in the face of brutal racism during the 1947 baseball season with the Brooklyn Dodgers.

Imagine if Earl Lloyd never played for the Syracuse Nationals of the National Basketball Association.

Would there have been a Muhammad Ali?

Would there have been a Magic Johnson, Michael Jordan or LeBron James?

Would Ken Griffey, Jr. have made it into the Baseball Hall of Fame?

Would Hitler have been proven correct about the darker races of the world?

We do not have to imagine the negative possibilities because of the courage, talent and bravery of Owens.