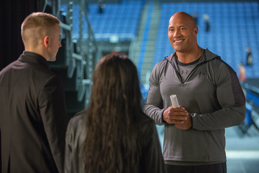 World Wrestling Entertainment (WWE) squabbles might be fake or scripted.

However, chasing one’s dream is the realest thing one can ever do.

“Fighting with My Family” does a great job of portraying the self-doubt that comes with striving for greatness, combining a cliché rags to riches tale with quirky, British humor.

In “Fighting with My Family, the Knight family is to professional wrestling what the Wayans family is to comedy or the Bush and Kennedy families are to politics.

That is definitely hyperbole, but you get the picture.

In some families, it goes without saying what line of work the children will pursue because it is in their genes.

In football, you have the Watts and Mannings.

In basketball, you have the Currys.

And in wrestling, you have the Knights.

But while all of the aforementioned families made fortunes in the family business, the Knights live like the Connors of “Roseanne” fame.

The Knights definitely have nothing in common with knights of royalty because the family epitomizes what it means to be a commoner in European society.

Julia Knight (Lena Headey) and her husband Ricky Knight (Nick Frost) teach their children Zak (Jack Lowden) and Raya (Florence Pugh) about the sport of wrestling from the time they are children, staging fights throughout their British hometown, which is totally apathetic to the sport.

The Knights even teach a blind boy how to wrestle.

Nevertheless, the family-owned wrestling company cannot gain enough traction in Europe to create a good life for themselves.

The World Wrestling Association is a bit of a misnomer.

The company is only world renowned in their very small community and only with a select group of people.

When Zak and Raya meet their hero The Rock (Dwayne Johnson), they seem shocked that he has not heard of their fledgling company.

The Knights are the working class in a country known for royalty.

Therefore, when Zak gets his young girlfriend pregnant and has no home or income to support her, the Knights’ lives totally clash with the more regal class of their town.

Zak’s new in-laws are everything that the Knights are not.

But more importantly, they have no idea what the WWE actually is.

They even have the audacity to call WWE fights fake instead of the preferred scripted definition that the Knights use.

However, when Zak and his sister receive invitations to audition for the WWE in the United States from Hutch (Vince Vaughn), they finally might be on the cusp of living their best lives.

But like in all feel-good movies, everything cannot feel good and be inspirational.

Feel good stories are filled with trials and tribulations and unexpected twists and turns.

But hopefully, all of the adversity can lead to an ultimate triumph in “Fighting with My Family.”

Although “Fighting with My Family” is the definition of a comedy, the film has several messages of importance that supersede the funny aspects of the film.

The film deals with being different in a society in which people look down on your eccentricities.

The film deals with the disdain people have for those born on the wrong side of the tracks.

And the film deals with the jealousy that occurs when a commoner makes enough money to cross the tracks into the better parts of town.

Furthermore, “Fighting with My Family” deals with family and the difficulties that come with providing for one’s family and maintaining the love for family members when dreams go awry.

The title “Fighting with My Family” is sort of like a double entendre.

The Knights fight with each other inside the wrestling ring.

Unfortunately, they fight each other outside of the ring like all other families.

If a family fights together, no adversity or hardship could ever defeat a truly loving and united family.

Although Johnson is the bona fide movie star in “Fighting with my Family” and has a small role in the film, the star is the film is Pugh.

Her role as an aspiring female wrestler will be so relatable for young women trying to find their way in a society that tells them that certain professions are not for them like sports.

Even when some women find success in sports, they face pressure to still appear as sex symbols in order to get lucrative paychecks, instead of just being able to focus on their craft like their male counterparts.

Frost is a beast in his comedic fatherly role.

He is the opposite of Tracy Morgan’s role as the patriarch of a star athlete in the recently released, “What Men Want.”

He wants his children to succeed as professional athletes.

Furthermore, he wants his family to move up in class.

But he is not overbearing like a Lavar Ball or a Joe Jackson.

He allows his children room to become their own people while also encouraging his children to continue in the family business of professional wrestling.

Additionally, “Fighting with my Family” deals with that dreaded sibling rivalry thing.

For every Peyton and Eli Manning, there is a Cooper Manning.

For every Stephen Curry, there is a Seth Curry.

Seth Curry is a respectable professional basketball player with the Portland Trailblazers.

However, his older brother Steph Curry is arguably the best shooter in basketball history.

Eli and Peyton Manning both won two Super Bowl rings, and both could wind up in the Pro Football Hall of Fame in Canton, Ohio.

However, Cooper Manning earned a football scholarship to Ole Miss and has a very successful career in television on Fox.

But despite the success of Cooper Manning and Seth Curry, how do they handle it when they realize their siblings are all-time greats and their career can only be described as serviceable.

Will that lead to family squabbles or will it lead to unconditional support and family unity?