Film Review: ‘Concussion’ Will Make You Look at Football Differently 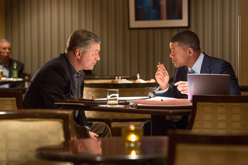 Although Norman did not sustain a concussion from Beckham’s dirty antics, the violence that that play epitomizes is the impetus for a movie like “Concussion.”

For generations, fans have cheered the barbaric and the violent acts of football then laughed at the consequences of that violence.

If Beckham’s childish meltdown was a bad dream for the NFL’s PR department, then “Concussion” is its worst nightmare.

The movie is that painfully powerful and makes one wonder why violence on the field is so celebrated in American culture.

“Iron” Mike Webster (David Morse) was one of the most respected centers in the game of football during his tenure with the Pittsburgh Steelers.

He won multiple Super Bowls, millions of fans and a ticket to Canton, Ohio, home of the Pro Football Hall of Fame.

However, after his playing career those cheers turned to jeers.

Those “atta boys” turned into laughter as he lost his mind, Super Bowl rings, and his family as he struggled with an undiagnosed illness.

However, when Mike succumbs to his illness, his death does not quite add up for Dr. Bennet Omalu (Will Smith).

Dr. Omalu originates from Nigeria and does not have the stereotypical American tendencies such as indifference to a fellow human being.

He cares for the dead as if they are his living patients.  Dr. Omalu treats a boring autopsy as if he is saving their lives, talking to the patients while listening to Teddy Pendergrass classics on his headset.

Despite the criticism of his colleagues as a result of his unusual tactics, he does not view Webster’s death as a mere suicide, but digs deeper and finds an illness to the brain not detected by CT scans.

From Webster’s autopsy, he discovers the unknown disease CTE, which later comes up in many deceased NFL athletes.

His discovery, which should be met with praise, is met with ridicule, hatred and retribution as the NFL attempts to silence the man who could spell doom for America’s most popular sport.

Sure, his most powerful movie is probably still “The Pursuit of Happyness” because of the importance of showing a strong, homeless Black father doing whatever it took to raise his son.

But, “Concussion” makes up for the subpar sports biopic “Ali.”

Just like in “Ali,” sports fans will know what’s coming.  But “Concussion” overcomes predictability with power and empathy for the former athletes.

While fans and media glamorize professional athletes and their families, many are dealing with true torture at home just for doing their job successfully.

Although billions of people are fans of the great game of football, “Concussion” will make one second-guess their love of the sport.

The film does not attack the game, it just tells the truth.

However, often the truth is the worst type of public relations of all.