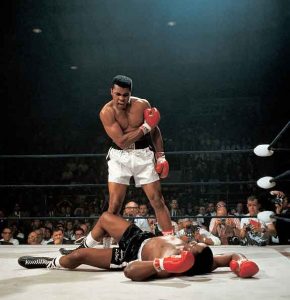 The documentary “My Father Muhammad Ali” shines light on the greatest as a father (Photo Credit: Getty Images).

How many more stories can filmmakers, biographers or documentarians make about Muhammad Ali, arguably the greatest boxer of all time?

Will Smith portrayed the champ in the biopic, “Ali.”

Netflix profiled his friendship with Nation of Islam minister Malcolm X in the documentary adaptation of the book, Blood Brothers.

As a result, what more can be learned about the pugilist formerly known as Cassius Clay?

Well, a lot more if the lens is turned on Ali the father.

That is especially true if the main character in “My Father Muhammad Ali” is the champ’s only son, Muhammad Ali, Jr.

The documentary “My Father Muhammad Ali” is a very eye-opening look into Muhamad Ali, the father, not the famous boxer.

Unfortunately, Muhammad Jr. still seems to be struggling with finding his own identity outside of his father’s huge shadow.

Because of that, people in his life like his “brother” Richard and his ex-wife seem like opportunists, looking for future benefits one day.

Furthermore, it is sad to see the son repeat some of the same parenting mistakes as his dad.

Those mistakes highlighted in “My Father Muhammad Ali” include not always being present in the lives of some of their children.

“My Father Muhammad Ali” begins as the younger Ali talks about the time that his father left him at a truck stop when he briefly left his father’s vehicle to purchase a hamburger.

When Muhammad Jr. asks his father why he left him stranded at the truck stop, his father told him he forgot that he had someone in the vehicle with him.

Or was it a sign of a deadbeat dad?

Regardless of the champ’s reasoning, viewers of the documentary “My Father Muhammad Ali” will immediately feel empathy for Muhammad Jr.

Having a father present in one’s life is critical to the development of a child, especially a boy.

However, how does it feel to know who your father is, see him constantly on television and in magazines, and still not have the ability to spend quality time with him?

Furthermore, how does it feel to have one of the wealthiest athletes and most famous person in the world as father but having to survive on one thousand dollars per month from that late father’s estate.

Not having much money to live on, not having an education or a trade and people gravitating towards you because of who they think you are and what they think you have must be a difficult way to live.

Couple that with the fact that nothing you do in life will measure up to the impact your famous father had on the world, and one can only imagine that everything that glitters is not always gold.

“My Father Muhammad Ali” depicts the bullying that Muhammad Jr. endured because of his famous father.

Additionally, “My Father Muhammad Ali” profiles the ridicule that Muhammad Ali, Jr.’s daughter endures at school because she boastfully talks about her grandfather, the greatest of all time.

Although she knows who her grandfather is, it is hard to prove to doubting peers that your family is sports royalty when you do not have a great relationship with your own father and do not have the money that the granddaughter of a celebrity might normally have.

However, what is admirable about the younger Ali is that he wants to take his experience as a bullying victim to help other victims learn how to defend themselves.

The documentary “My Father Muhammad Ali” depicts the champ’s son’s journey to build boxing gyms throughout the country that champions his father’s legacy, while also combatting a problem that has led many young people to commit suicide or commit acts of violence against others.

The problem for Muhammad Jr. is that very few understand the purpose behind the boxing camps for bullying victims, including his psychologist.

Not too many people show up for his press conference announcing his non-profit to combat bullying.

The media members he talks to seem more interested in his impressions of his father, which are actually spot-on.

He naturally sounds and looks like his father, and has his jokes down pat.

Those common characteristics make him a likeable figure.

However, when he charges autograph and picture seekers to take photos with him, it comes across as exploitive.

Any man, especially in these times, who will open up to a therapist and admit their wrongs, while not using other people’s mistakes as an excuse is a standup human being that deserves praise.

The split screen look that “My Father Muhammad Ali” uses during the therapy session is extremely effective because it allows viewers to see Muhammad Jr.’s reactions to the questions and the psychologist’s reactions to his responses.

The most endearing scenes in “My Father Muhammad Ali” is the scenes with the champ’s brother, Rahman Ali.

Anyone who knows anything about Ali knows how close he was with his younger brother, Rahman.

The younger brother still looks up to his big brother and all that he accomplished in life, reminiscing on their childhood when Muhammad told Rahman about how successful he would be.

The problem though is finding success when a parent or sibling has set the bar so high.

Rahman always seemed at peace in his brother’s shadow.

But can Muhammad Jr. ever reach that level of peace?

One must view “My Father Muhammad Ali” to find out if he ever does.

“My Father Muhammad Ali” opens Jan. 13 at Studio Movie Grill in Pearland, Texas as well as on video on demand.