Film Review: ‘The Hate U Give’ Most Powerful Movie of Year 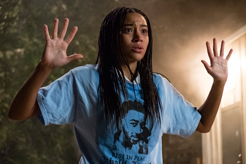 Most Powerful and Most Important Film of 2018

On the track “Trapped” from his debut album “2Pacalypse Now,” Tupac Shakur (2Pac) rapped, “Tired of being trapped in this vicious cycle, if one more cop harasses me I just might go psycho, and when I get ‘em I’ll hit him with the bum rush, only a lunatic would like to see his skull crushed, Yo, if you’re smart you’ll really let me go ‘G’, but keep me cooped up in this ghetto and catch the Uzi, they got me trapped.”

The film “The Hate U Give,” gets its name from Shakur’s acronym for his movement and rap collective, Thug Life, which stood for, “The hate u give little infants F’s everybody.”

Basically, Shakur’s statement encapsulates the rage and violence that erupts when America forces African-Americans, other minorities and the poor into a vicious system with no way of ever getting out of the situation.

“The Hate U Give” depicts that rage and is undoubtedly the most powerful, important, heartbreaking, realistic and frustrating movies of 2018.

In the ghetto a trap exists.

In the ghetto, many residents do not have much money or many job opportunities.

In the ghetto, normal necessities often cost more money than they do in more affluent areas.

In the ghetto, the government and other entities ship drugs in and then arrest people for selling them or using them, knowing that poor people sometimes only have drugs and street crime as an avenue to a better life.

Therefore, in the ghetto, the 13th Amendment hits especially hard because slavery is legal in America for imprisoned criminals.

Private corporations and the government make an excessive amount of money off of Black, brown and poor White “slave labor,” which means basically 100 percent profit.

When the former prisoners return to the ghetto, they sometimes lose their right to vote, which disenfranchises an exorbitant amount of minorities, keeping the majority in political power.

And when ex-criminals pay their debt to the society, they are often trapped in the ghetto again because many companies refuse to hire ex-convicts.

In other words, like Shakur said, the system or the trap F’s everyone.

“The Hate U Give” begins with “the talk.”

In White families, “the talk” probably deals with the birds and the bees.

But in Black families, “the talk” deals with the life and death predicament that arises when dealing with police officers.

Black families have to teach their children how to talk to police officers without appearing threatening.

Black families have to teach their children what to do with their hands when stopped by police officers.

And unfortunately, Black families have to teach their children that some police officers might be more of a danger to them than hardened criminals.

Black people always have to have a double consciousness to survive in this world, which consists of their true personality versus the personality that makes White people comfortable.

However, that reality is Starr Carter’s (Amandla Stenberg, “The Hunger Games”) reality because she lives in a poor, high crime, predominantly African-American neighborhood.

But she attends an affluent private school with her brother and half-brother called Williamson, which is predominantly rich and White.

Although Starr likes her school and her friends at school, she hates that she has distanced herself from her old friends in her own neighborhood.

Her mother Lisa Carter (Regina Hall, “The Best Man Holiday”) wants her family to move to a better neighborhood.

But Starr’s father Maverick “Mav” Carter (Russell Hornsby, “Fences”) believes that the Garden Heights neighborhood is their home and that he can do a lot of good for the neighborhood by staying and running his business, the Carter Grocery Store.

Maverick once sold drugs as a part of King’s  (Anthony Mackie) street gang, but because he did prison time for someone else’s crime he was able to exit the dope game without any consequences or repercussions.

“Mav” is able to provide his family the type of structure he never had growing up, considering that his father was in jail during his upbringing.

And although his children have their issues to deal with, they are doing well in school, extracurricular activities and in their personal lives.

Starr has a White boyfriend who seems to care about her but does not know much about her real life.

And she has some good female friends that have her back.

But when her childhood friend from the neighborhood Khalil (Algee Smith, “Detroit”) is killed by a police officer for reaching for his hair brush after a traffic stop, her whole world turns upside down in an instant.

She is the only witness to Khalil’s death besides the officer in question.

And while the media begins to assassinate Khalil’s character, as is custom when an unarmed Black man is killed by a police officer, she can change the narrative and get justice for Khalil’s grieving and devastated family.

Does she keep quiet and avoid the scrutiny that is sure to follow if she testifies in front of the grand jury?

Or does she behave like a true friend and be Khalil’s voice from beyond the grave?

Either choice will probably be detrimental to her and her family.

“The Hate U Give” is the realest film of the year and probably the entire decade.

However, the opening narration by Starr that sets up the story was kind of cheesy but necessary to understand Starr’s plight.

Many people will hate “The Hate U Give” because of the message of police brutality and systemic racism.

However, anyone who hates “The Hate U Give” probably does so because they have hatred in their hearts and do not have any empathy for what Black Americans deal with on a daily basis when we encounter some police officers.

The anger is real and that anger, unfortunately, turns to hate sometimes.

As Shakur rapped on “Holla if Ya Hear Me” in 1993, “I guess because I’m Black born I’m supposed to say peace, sing songs and get capped on. But it’s time for a new plan, BAM! I’ll be swingin’ like a one man clan, here we go, turn it up, don’t stop, to my homies on the block getting dropped by cops…This ain’t just a rap song, a Black song, tellin’ all my brothers, get they strap on and look for me in the struggle, hustlin’ ‘til other brothers bubble, holla if ya hear me.”