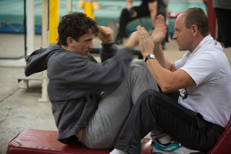 The Real Life ‘Rocky’ on Steroids

On Steve Harvey’s concert film “Still Trippin’,” he responded to fans who thought his producers made up the stories in the “Strawberry Letter” segment by stating that nobody on his staff was that talented.

In 1976, Sylvester Stallone captured the strength and resilience of a true fighter in “Rocky.”  But the “Italian Stallion’s” story pales in comparison to the story of the “Pazmanian Devil.”

The Vinny Pazienza biopic “Bleed for This” is so powerful and at times scary, it is more like “Rocky” on steroids, making it almost impossible to leave theaters without feeling inspired.

Vinny (Miles Teller) is like the Floyd Mayweather of the late 1980s, only with actual punching power.

He is bold and brash.

And he parties even harder.

The only thing that is different between Vinny and Mayweather is that Mayweather always backs up his trash talking.

Unfortunately for Vinny, “Bleed for This” begins with a crushing defeat at the hands of Floyd Mayweather’s uncle Roger Mayweather (Peter “Kid Chocolate” Quilin) in 1988.

Vinny flashes his trademark grit from desperately trying to make weight for the fight to taking some brutal punches in the ring.

Instead of earning the belt from Roger, Vinny earns a trip to the hospital, where his promoter Lou Duva (Ted Levine) all but declares the end of Vinny’s boxing career.

With all hope for a return to the ring almost gone, Vinny receives one last chance from Mike Tyson’s former trainer Kevin Rooney (Aaron Eckhart), who thinks it would behoove Vinny to jump up a couple of weight classes when he notices that he does not lose speed when he gains weight.

However, all momentum is lost when he is nearly paralyzed in a car accident after the biggest fight of his life.

Although doctors are doubtful that Vinny will ever walk again, he is determined to fight again, which could put his life in serious jeopardy.

“Bleed for This” is an emotional true story that proves why people should not listen to naysayers and critics.

When critics told Vinny that his road to recovery was not that simple, he replied that it was simple.

One simply had to do the work.

Teller is steadily moving up the ranks as one of the best actors in Hollywood.

The Downingtown, Penn. native masters the nuances of the 1980s from his mustache to his denim jacket and the pouch around his waste.

Vinny and his crew even ball out at the strip club to the classic late 1980s song “Monkey” by George Michael.

“Bleed for This” is able to capture the strong family bonds of Italian-Americans without coming across as stereotypical.

Katey Sagal (“Married with Children”) is almost unrecognizable as Vinny’s religious mother Louise who cannot even watch his fights out of fear and anxiety.

Furthermore, when Vinny bangs his head and tries to lift weighs with the halo on his head it is cringe worthy.

Unfortunately, “Bleed for This” ends predictably, which is understandable considering it is an inspirational film.

But it accomplishes its goal, and possibly places itself on the Mt. Rushmore of greatest boxing films of all time, proving that real life is often more interesting than anything that Hollywood can create.