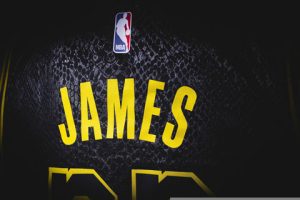 Billy Hunter has hit Los Angeles Lakers great LeBron James and others with a $10 million lawsuit over an upcoming documentary on Black hockey players in Canada.

Basketball legend LeBron James and music superstar Drake have found themselves on the receiving end of a lawsuit surrounding a documentary movie about an all-Black Canadian hockey league to the tune of $10 million.

Former National Basketball Players Association executive director Billy Hunter said he paid $265,000 for the rights to the book in which the documentary is based on.

In the lawsuit, Hunter’s lawyer Larry Hutcher said, “A documentary is still a ‘motion picture’ and an ‘audiovisual adaptation’ and any claim to the contrary is absurd and made in bad faith.”

The lawsuit states that after Hunter cut his deal, the writers made another deal with James and Drake, whose real name is Aubrey Drake Graham.

The New York Post reported, “In the lawsuit, Hunter accuses defendants who include four-time NBA champion and MVP James and ‘Nice For What’ singer and Canadian Drake and their entertainment companies of cutting a deal behind his back with the authors of the critically acclaimed book that the documentary is based on—‘Black Ice: The Lost History of the Colored Hockey Leagues of the Maritimes: 1895 to 1925.’

“The authors, George and Darril Fosty, are also listed as defendants, citing breach of contract for allegedly violating the agreement giving Hunter the rights to produce a movie on the Black hockey league and instead working out a side deal with Team LeBron.”

Also included in the lawsuit are The Springhill Company (James’ company), Uninterrupted Canada, Dreamcrew Entertainment (Drake’s company with rapper Future), the Fostys, their publishing company, and Stryker-Indigo a film production company that, according to reports, helped broker the deal that solidified the rights for Springhill.

The James and Drake-produced documentary will debut on Sept. 10 at Toronto International Festival (TIFF).

Hunter said, “I don’t think they believed the property rights would be litigated. They thought I would go away. They gambled.”

Chris Bengel of CBS Sports reported, “Hunter alleges that the authors of the book struck a deal with James and Drake behind the defendants’ back after they had already paid $265,000 for the rights to the film…

“Per the lawsuit, the Fostys acknowledge that Hunter owned the movie rights, but argue that the ‘Black Ice’ documentary was a ‘separate entity’ that wasn’t within the parameter of their deal. Meanwhile, Hunter claims that he paid $250,000 for the ‘exclusive worldwide rights’ to any ‘audiovisual’ version of their story.”

From 1895 to the 1930s, the Colored Hockey League operated in Canada in much the same way that the Negro Leagues operated in America for Black baseball talent who could not participate in the main league because of racial barriers.

In many instances, the Black players in the Colored Hockey League had just as much talent, and sometimes more, than their White counterparts.

Baseball receives the moniker of America’s pastime because for decades it was more popular than any other sport in the United States.

The same thing could be argued for hockey in Canada.

Last year, director Hubert Davis said, “I think it is more important than ever before all generations, particularly young people of color, to understand and see the diverse faces who have contributed and shaped one the essential fabrics of our country.”

Arun Srinivasan of Yahoo Sports reported, “Darril Fosty told TMZ that both him and his brother believe the lawsuit is frivolous, and will have official comment through their legal team. LeBron and Drake have not provided comments through their representatives at the time of this writing.

“Though the legal process obviously has to play out here, it does seem like a somewhat frivolous lawsuit at first glance, especially coming from Hunter, who isn’t invested in the hockey space. The timing is certainly curious, too, as ‘Black Ice’ is one of the most widely anticipated films at TIFF, a festival that operates as the entry point into film awards season. We’ll see where this goes.”

In the lawsuit Hutcher said, “While the defendants, LeBron James, Drake and Maverick Carter are internationally known and renowned in their respective fields of basketball and music, it does not afford them the right to steal another’s intellectual property.”

Part of the reason James left the Cleveland Cavaliers for the Los Angeles Lakers is to live closer to the motion picture industry.

In August, the NBA great signed a contract extension worth $97.1 million that will keep him in the purple and gold of the Lakers until 2024.

The contract extension made headlines because it made James the highest paid athlete in NBA history with career earnings of $532 million.

He has also increased his earnings in Hollywood in recent years.

James has also produced sports documentaries on soccer star Neymar, tennis star Naomi Osaka and the documentary “Shut Up and Dribble,” which addressed athletes and social and political activism.

Drake who rose to some level of fame on television before he took off as a rapper/singer has production credits for documentaries like “Ready For War” and “The Carter Effect” on retired basketball star Vince Carter.

Earlier this year, Drake released a dance album entitled “Honestly Nevermind,” which received mixed reviews from fans and critics because of the album’s departure from hip-hop.