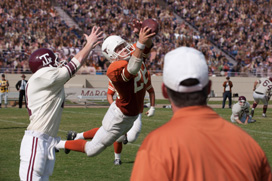 Cliché Can Be Good

Underdog athlete or underdog team brings people together to accomplish the nearly impossible, inspiring all to reach for their dreams in the process.

And “Remember the Titans” told the story.

And “My All American” is definitely a good story worth telling.

“My All American” is the equivalent of “Rudy” with a sadder twist.

He is too small to play D1 college football but that does not stop him from going the extra mile in everything he does, academically or athletically.

Even in high school, he is the heart and soul of the team even though the most talented player on the team is prototypical athlete Tom Campbell (Richard Kohnke).

However, when University of Texas scouts come to their Colorado high school to recruit Tom, they are equally impressed with Freddie and offer both a scholarship to play for the Longhorns.

Playing for legendary Texas coach Darrel Royal (Aaron Eckhart) is a dream come true for Mr. Inside (Tom) and Mr. Outside (Freddie) as they call themselves on the gridiron.

But that dream starts off as a nightmare during their sophomore season as the Horns fail to hook very many of their opponents.

However, when Freddie is named starting safety and underdog quarterback James Street is named QB1, the Longhorns start a run that ends with winning the national championship over Arkansas in the “Game of the Century.”

However, before the Longhorns are able to put the icing on the cake with a matchup against Notre Dame in the Cotton Bowl, Freddie finds himself in the fight of his life.

But as all of Freddie’s teammates know, he has never been one to shy away from a fight.

“My All American” succeeds because it is able to tap into the emotions of moviegoers whether they are Longhorn football fans or sports fans in general.

Despite the cliché story and predictable dialogue, Wittrock is able to channel the charisma that made Freddie such a beloved teammate.

“My All American” boasts some Longhorn royalty from the cast, which features Juston Street playing his famous father and Jordan Shipley starring as Cotton Speyrer.

Writer and director Angelo Pizzo does a touching job inserting a real locker room scene after the Cotton Bowl victory against the Notre Dame Fighting Irish.

The “Game of the Century” also features real footage of President Richard Nixon arriving at the game in Fayetteville, Ark.

But it would have been cool to see the locker room footage of President Nixon announcing the Longhorns as national champions following the come from behind victory against the Arkansas Razorbacks.

A closing scene featuring the Longhorns running on the field after saluting a memorial to Freddie would have been better with real footage as well.

Regardless, “My All American” proves why things become clichés.

If people do things over and over there must be a good reason.

“My All American” is definitely a good reason to continue the cliché trend.