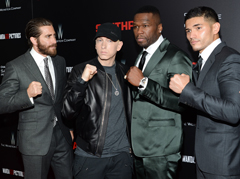 Strength is a word that is often sold short of its full meaning.

Especially in boxing films from the “Rocky” franchise to “Diggstown,” fans of boxing often marvel at how one can muster the strength to voluntarily put their health in danger by stepping into the ring.

However, “Southpaw” is much different than the cliché boxing story.

Billy Hope has channeled his inner Muhammad Ali from “The Rumble in the Jungle.”

In Ali’s fight against heavyweight champion George Foreman, the former champ at the time discovered good news and bad news about himself.

The good news was that Ali could take a punch.

The bad news was that Ali could take a punch.

Hope’s only defense in the ring is taking the punishment from his opponent head on, and then countering that with his own vicious onslaught.

That tactic has led to the light heavyweight championship, an undefeated record, and a beautiful wife Maureen (Rachel McAdams) that’s had his back since he was a preteen, a precious daughter and the house of all houses.

However, the controlled rage that Hope sometimes fights with becomes uncontrollable outside of the ring.

When challenger Miguel Escobar (Miguel Gomez) threatens his manhood at a gala, he loses his temper, his wife and his reason for living all in a split second.

After being banned from boxing because of an ugly incident in his fight with Kwame Tu’Ray (Rayco Saunders), he eventually loses custody of his daughter Leila (Oona Laurence).

Leila goes from living in a mansion to living within the system, which is a lifestyle that her parents thought their family had escaped for good.

In order to get back all that he has lost, Hope teams up with trainer Tick Willis (Forest Whitaker) to regain some of the dignity that he has lost because of his lack of strength outside of the ring.

“Southpaw” is much more than a boxing film.

“Southpaw” is a microcosm of the rollercoaster of life and a true depiction of the various strengths and weaknesses that are in all of us.

Sure, Hope is strength personified in the boxing ring but he is mostly frail when it comes to the bouts of life.

Maureen had been his strength outside of the ring, but without her he must find ways to cope with the pressure of life without imploding and exploding on others.

The boxing scenes are beyond real.

Thanks to real life fighters and great camera angles, the fight scenes look like they are taken directly from “ESPN Friday Night Fights.”

The cast is very good as well. Curtis “50 Cent” Jackson is not a great actor, but an adequate one when he stays in his lane.

His role in “Southpaw” was right up his alley considering his love for boxing.

Actor Skylan Brooks, who plays Hoppy, is someone people need to look out for in the coming years.

Brooks was brilliant in “The Inevitable Defeat of Mister of Pete” and he turns in another good performance in “Southpaw.”

Although her death was necessary to the film, more screen time for the talented McAdams would have been great via flashbacks.

Nevertheless, “Southpaw” is an extremely strong movie because it doesn’t sugarcoat strength.

It deals with the strengths and weaknesses that all human beings possess.