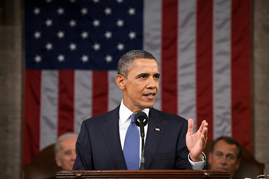 So much for a quiet retirement for former President Barack Obama because some potential presidential candidates have sought counsel from him about running for the Democratic presidential nomination in 2020 and he has obliged.

Although President Obama remains reluctant to get back into the political fray, the 44th President of the United States has secretly met with presidential hopefuls.

“I think it’s great that he’s meeting with people who are interested in the future of the country and the party,” said a person with knowledge of the meetings.

The meetings remained such a secret that many of Obama’s closest advisors did not know of the gatherings.

This is so because Obama dislikes his private meetings becoming public.

While Obama has spoken out against President Donald Trump as it pertains to the Iran nuclear deal, Obamacare and Dreamers, he has remained virtually mum on President Trump because he wants to focus more on the future of the Democratic Party.

His goal, obviously, remains on helping Democrats succeed in the midterm elections of 2018 and on taking back the White House in 2020.

“He has been very clear about the need for the Democratic Party to rebuild and part of that is lifting up the next generation of leaders,” The Democrat said. “So if people want advice or a gut check or just to come in and look at the challenges we face, he is happy to do that.”

Obama does not proclaim to have answers for the Democratic Party’s future success, but took the meetings to be a sounding board for those with ideas for the political party.

Sanders requested a meeting with Obama, which took place in March.

During the sit-down, the two liberal politicians talked about the future of the party, the issues the party should focus on and the difference between idealism and practicality when it comes to goals the two remain passionate about.

Although critics have said that Sanders does not have a great relationship with the former POTUS, he does have a great deal of respect for Obama.

During the meeting, Sanders made no commitment on running for the 2020 Democratic presidential nomination.

However, Obama and Warren have had some big disagreements in the past, such as Obama’s $400,000 fee from a speech at a Wall Street investment firm.

Warren labeled it as an example of “a snake that slithers through Washington.”

After that statement, Obama invited Warren in for their first meeting to discuss her concerns.

Although Warren did not apologize at the meeting, the two heard each other out.

The second Obama and Warren meeting took place in April and lasted for approximately 90 minutes.

During the meeting, the two politicians reminisced, talked about President Trump and Richard Cordray, the Democratic nominee for governor of Ohio and former head of the Consumer Financial Protection Bureau.

Obama and former Massachusetts Governor Patrick share a personal friendship and not just a political relationship.

Many in Obama’s circle of close associates remain hopeful that Deval will enter the race in 2020.

Patrick has given hints recently that he just might enter the field in two years.

However, Patrick serves on the board for the Obama Foundation so the meeting might have centered on the foundation and not Patrick’s political future.

Former Vice-President Biden and Obama remain close friends as well, often talking on the telephone in their two years away from the Oval Office.

Sources close to Biden say that the former vice president will wait until after the midterm elections to determine if he will run for the presidency of the United States.

However, many insiders believe that Biden is leaning towards running for the highest office in the land.

Even Obama’s harshest critics have had to admit, that his silence in the first two years of Trump’s presidency shows a great deal of restraint and humility.

That humility had come across as doubt after the 2016 presidential election, when Obama questioned if his politics had gone too far.

Those closest to his administration wondered if he had alienated Rust Belt workers, those on the religious right and working class Whites and “pushed too far” with his progressive values.

Many of Obama’s critics believed that the country had changed too fast under his administration adding fuel to the fire as it pertains to the country’s cultural war.

Obama believes that maybe people just want to fall back into the comforts of their own “tribe” or demographic.

Nevertheless, many political pundits say that Obama and the Dems have played the first two years of the Trump presidency well.

After the stunning loss of Secretary Clinton, the party needed to regroup and readjust their plan of attack going forward in 2018 and 2020.

With that in mind, Obama has quietly entered the fray of political consultancy.

Along with focusing on Russian interference in the 2016 presidential election, Obama has advised those eyeing a run at the White House in 2020 to avoid rocking the boat with too many progressive ideas and to avoid defining oneself in a negative light.

Additionally, Obama has advised potential candidates to not make their campaign about Trump.

“The way to disempower Trump is to ignore him, but it’s too hard even for his opponents to do it,” said Tim Wu, a Columbia University School of Law professor. “It has to be a true attention battle.”

Wu said that Democratic platform and campaign has to garner just as much attention as Trump with its programming and celebrity supporters and not simply resort to an “I Hate Trump” campaign.

Trump has a low approval rate overall, but enjoys an 87 percent approval rating within the Republican Party.

The president’s administration owes much of its success to a liberal and elitist backlash from Middle America.

Polling shows that any Democrat would beat Trump 44 to 36 percent if the election happened today.

However, those dynamics will change depending on whom the Democrats nominate in 2020.

Whoever receives that nomination will more than certainly have the mentorship of the first Black President of the United States.