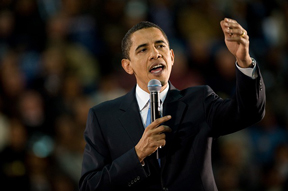 The President Barack Obama speech fee of $400,000 has drawn criticism from liberals and conservatives alike.

Controversy and the presidency go hand-in-hand and that is no different for former President Barack Obama.

The first African-American president in history made his first public appearance since leaving the White House this week at a panel discussion for civic engagement at the University of Chicago, where he previously served as a constitutional law professor.

However, his commitment to civic duty immediately faced criticism when he set a $400,000 speaking fee for an upcoming event on healthcare.

The Obama speech will earn him the equivalent of his annual salary as president of the United States.

“I don’t think that former presidents necessarily take vows of poverty, or should,” said David Axelrod, one of Obama’s former advisors.  “Will he be out there doing good?  I think he will be.  I watched him for over eight years devote every ounce of his energy and thought and attention to the service of his country.  I hope that he does find some personal time and solace and enjoyment now.  He’s earned it.”

Despite his commitment to service, the $400,000 Obama speech fee is not the only “excess” he is being criticized for like kite surfing with billionaire Richard Branson, founder of the Virgin Group.

According to the New York Times, “the former president’s departure from office was marked by the mother of all parties…and included guests like Meryl Streep, Tom Hanks, Stevie Wonder and Paul McCartney…

“Mr. Obama and his family now live in an 8,200-square-foot, nine-bedroom home in Washington valued at $6 million.  The house, which rents for an estimated $22,000 a month, is in one of Washington’s richest neighborhoods, surrounded by ambassadors, executives and other members of the political elite.”

However, criticism of the $400,000 Obama speech price tag is to be expected.  What is surprising is that critics complain about the price of an Obama speech, when the previous ex-presidents all charged six figures for post-presidential speeches.

Former presidents charging large sums of money for appearances and living in exclusive communities seems par for the course for recent ex-commanders-in-chiefs.

According to the New York Times, former President Bill Clinton charged an average of $200,000 per speech for a decade.

And former President Ronald Reagan earned $2 million for a week of speeches in Japan.

Former President George H.W. Bush lives in the wealthy River Oaks neighborhood in Houston while his son lives in an 8,501 square foot home in the affluent Dallas neighborhood, Preston Hollow according to Texas Monthly magazine.

According to the New York Times, “Mr. Obama, who grew up without great wealth, had amassed several million dollars by the time he became president, mostly from sales of his first book, ‘Dreams of My Father.’  He and his wife, Michelle have each received multimillion-dollar contracts to write new memoirs.  Some reports pegged the two book deals together at a total of $60 million.”

Despite the criticism, presidents earning big paydays once they leave office will always be commonplace.

Obama will speak in Boston on May 7 at the John F. Kennedy Library and Foundation.

He will also appear with Chancellor Angela Merkel of Germany later in May for a public discussion.