How Would Martin Luther King, Jr. Have Responded to Trump Presidency? 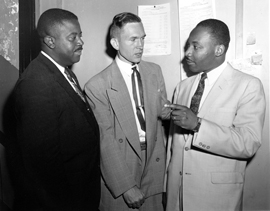 Rev. Ralph Abernathy, Rev. Robert S. Graetz and Dr. Martin Luther King, Jr. (L-R) talk outside of the witness room during the bombing trial in Montgomery, Ala. on May 28, 1957.  Abernathy’s home and church were bombed as well as the home of Graetz, who had an all Black congregation (Photo Credit: AP Photo).

What Would Martin Luther King, Jr. Say About Trump Presidency?

Black History 2017 has a unique meaning.

However, as dissidents continue to voice their displeasure with some of President’s Trump’s policy, it is important that they do so with love and not malice in their heart.

Martin Luther King, Jr. is often remembered for a couple of speeches.  But his continuous messages of love will rain true in perpetuity because they were based in truth and hope.

President Trump may often stoop low but it is up to opponents not to be reduced to his level.

It is important that critics still pray for the new president and show him the respect that he often refuses to show to others.

Trump is America’s official leader, but true leadership often comes from those regular citizens whose wisdom makes them richer than anybody’s bank account can ever make them rich.

Therefore, continue to mediate of the words of King and others so citizens can truly make America great again!

The words of King are in quotations.

“Every man must decide whether he walks in the light of creative altruism or in the darkness of destructive selfishness.”

(Although many people only think about their specific demographic, community or country, the world will still remain a dark and divided place until people embrace all humans as brothers and sisters regardless of their origin.)

“Injustice anywhere is a threat to justice everywhere.”

(Too often people only worry about an injustice if it negatively affects them and then want others to empathize with their struggle.  If one cannot empathize with the struggles of others, they cannot expect empathy or change.)

“Never forget that everything Hitler did in Germany was legal.”

(Although Americans should respect and pray for its leaders, that does not mean those leaders should not be held accountable for actions that are wrong.  The American government is a government of checks and balances for a reason.)

“Never succumb to the temptation of bitterness.”

“The question is not whether we will be extremist but what kind of extremist will we be.”

(Being an extremist is not necessarily a bad thing if you are extreme for a good and noble cause.)

“Change does not roll in on the wheels of inevitability, but comes through continuous struggle.  And so we must straighten our backs and work for our freedom.  A man can’t ride you unless your back is bent.”

(Equality is not something that can be achieved permanently; it has to be maintained through a continuous fight for justice.  It is imperative that average Americans continue to let their voices be heard despite the election season coming to a close.)

(The fight for justice is just that, a fight.  It will never be freely given.  People must continue to demand it.)

“Before the Pilgrims landed at Plymouth, we were here.  Before the pen of Jefferson etched across the pages of history the majestic words of the Declaration of Independence, we were here.  If the inexpressible cruelties of slavery could not stop us, the opposition we now face will surely fail.”

(No politician or policy can ever defeat a people if those people are on the side of righteousness.  Those worrying about the impact of Trump’s presidency on the Black community should know our fate is never in man’s hands anyway.)

“Nonviolence means avoiding not only external physical violence but also internal violence of spirit.  You not only refuse to shoot a man, but you refuse to hate him.”

(Hating someone because they seem to hate others makes us no better than the original hater.  Hate also stops people from enjoying their blessings.)

(Right is right and wrong is wrong no matter what the circumstances are.)

“I refuse to accept the view that mankind is so tragically bound to the starless midnight of racism and war that the bright daybreak of peace and brotherhood can never become a reality.”

(One only has to look to innocent children who do not see race to know that people are capable of living in unity despite superficial differences.)