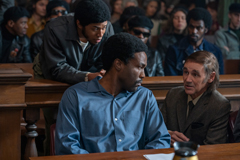 A Year Like No Other for Hollywood: RegalMag.com’s Top 10 Movies of 2020

Thank God it is officially the first full week of 2021 (I wrote that sentence before the riots in Washington, D.C. Maybe, I should have rewritten it. But, I digress).

And like everything else, the movie business produced less than their best considering all of the upheaval in the industry from postponed film productions to shut down movie houses.

Although 2020 did not give us the plethora of films that other years gave us, the movie industry still released some gems, obviously.

Therefore, RegalMag.com would like to give you our 1o best movies in a year (in no particular order) that will go down forever in infamy.

“One Night in Miami”—Hollywood has produced films on Malcolm X. The industry has produced films about Muhammad Ali. Jim Brown’s likeness has appeared in films like “The Express.” But to bring those three kings together with another king, Sam Cooke, resulted in a masterpiece from director, Regina King. The movie is a fictional account of the night that Cassius Clay defeated Sonny Liston for the heavyweight boxing title in 1964 in Miami.

“Sound of Metal”—The Prime Video movie “Sound of Metal” represents the sound of brilliance. Even if someone does not love heavy metal music, they will appreciate the pain felt when one’s lifelong dream gets snatched from them instantly, and they have to find new meaning and purpose in life. In “Sound of Metal,” Ruben (Riz Ahmed) is a struggling drummer, on the verge of his long-awaited big break in the music business when he begins losing his hearing. Although disabilities have failed to kill some musical careers, how can a musician survive without his/her golden ears? Like in the animated movie “Soul,” Prime Video’s “Sound of Metal” proves that spark might be more important the purpose.

“Bad Boys for Life”—Better late than never for the third installment of the Will Smith and Martin Lawrence franchise, “Bad Boys.” The third installment of the successful buddy cop franchise had its hilarious moments like bringing Reggie back into the fold. Additionally, “Bad Boys for Life” had its heartfelt moments as popular characters saw their exit from the franchise, which dates back to 1995.

“Ma Rainey’s Black Bottom”—Thanks to Denzel Washington, August Wilson plays are getting the big screen Hollywood treatment. Although Netflix’s “Ma Rainey’s Black Bottom” did come across more as a stage play than a movie like “Fences,” the film boasted marvelous performances by Viola Davis and the late, great Chadwick Boseman. With those heavyweights, greatness had to follow. And what better way to send Boseman to the Heavens than with an otherworldly performance in his final role.

“The Photograph”—For decades, African-Americans have yearned for films that simply showed the community living ordinary lives and dealing with ordinary problems. Tales of racism and slavery have a historical perspective. Tales of a life in the hood resonate with a certain segment of the population. However, not all African-Americans can relate to tales from the hood, and many simply love seeing love stories that show regular couples trying to survive a regular life.

“Sylvie’s Love”—Just like “The Photograph,” the Prime Video movie “Sylvie’s Love” depicted African-Americans navigating normal life, looking for love and looking for success in their careers. In the movie, that has similarities to “Love Jones,” “The Photograph,” “The Notebook” and “La La Land,” Sylvie and Robert portray soul mates trying to make it in the entertainment business and as a couple, even though they come from different socioeconomic backgrounds.

“Let Him Go”—Great movies have a way of bending the genres, creating a hybrid type of movie. In 1994, “Jason’s Lyrics” blended a hood movie with a beautiful love story. “Let Him Go” does something similar. Instead of a romantic love, “Let Him Go” showed how far people would go for the love of a family member. And instead of a hood element, the film had an organized crime element.

“The Invisible Man”—What if you knew someone from your past was alive although they had been pronounced dead? What if that person was an abusive spouse and it took years for you to leave them and begin life anew?  What if that person worked in the field of technology and optics, which allowed them to become invisible? But it is extremely difficult for Cecilia to convince the public that Adrian is alive when his suicide got so much attention in the press. There is a thin line between ingenuity and insanity, and Cecilia has to prove she is not crazy, but smarter than the average bear when it comes to the evil of her ex-husband.