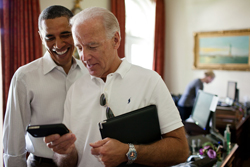 The 2020 presidential election will go down as one of the most unprecedented elections in the history of the United States.

Likewise, the inauguration and the subsequent parades and balls will not look the same as in years past.

Vice President-elect Joe Biden will host a “virtual parade across America” on inauguration day because of the coronavirus pandemic.

“Our goal is to create an inauguration that keeps people safe, honors the grand traditions of the presidency, and showcases the Biden-Harris Administration’s renewed American vision for an inclusive, equitable and unified citizenry,” said Delaware State University President Tony Allen, the Presidential Inaugural Committee’s CEO.

The Presidential Inaugural Committee website said that the virtual parade “will celebrate America’s heroes, highlight Americans from all walks of life in different states and regions, and reflect on the diversity, heritage and resilience of the country as we begin a new American era.”

Additionally, performers for the inauguration and virtual events will get announced at a later date.

Stephanie Cutter and Ricky Kirshner will serve as executive producers for the inaugural events.

The inauguration committee brought in Rod O’Connor as a senior advisor.

O’Connor will work with a group that has produced events like the virtual 2020 Democratic National Convention, past Super Bowl halftime performances, the Tony Awards as well as past presidential inaugurations.

The inauguration will also pay respects to those that have lost their lives due to the coronavirus pandemic.

Biden’s inauguration committee spokesperson Pili Tobar said, “In the midst of a pandemic—when so many Americans are grieving the loss of family, friends and neighbors—it is important that we honor those who died, reflect on what has been one of the more challenging periods in our nation’s history and renew our commitment to coming together to end the pandemic and rebuild our nation.”

The inauguration of Biden as the 46th president of the United States will take place on Jan. 20.

This inauguration holds significance because Vice President-elect Kamala Harris will become the first woman to serve as vice president of the United States.

Her husband Doug Emhoff will become the nation’s first ever second gentleman.

Despite all of the preparation for a safe inauguration in the midst of the coronavirus pandemic, now the inauguration team will have to deal with added security concerns in the wake of the attempted coup, which culminated in rioters storming the United States Capitol building on Wednesday.

In a statement, Gov. Wolf said, “The unprecedented and disturbing events (Wednesday) in our nation’s capital are cause for ongoing concern and Pennsylvania is prepared to assist as needed in securing peace and an orderly transfer of power on January 20.

“Our National Guard members will assist the D.C. National Guard and local civilian authorities as they work to keep the area surrounding the Capitol and other locations secure in the coming days leading up to the inauguration of President-elect Biden.”

The D.C. National Guard will mobilize for 30 days, which includes inauguration day.

CNBC.com reported, “The troops, who are unarmed, will monitor air traffic control points and provide support to the Capitol Police on (yesterday) as authorities work to secure the perimeter surrounding the Capitol Building one day after a mob supporting President Donald Trump stormed it.”

Ashli Babbitt died after getting shot in the chest by police, and the other three died of medical issues.

Furthermore, Capitol Police officer Brian D. Sicknick succumbed to injuries he sustained after rioters stormed the U.S. Capitol and hit him with a fire extinguisher.

Approximately 200 troops, with riot gear, will monitor the streets on the day of inauguration.

Possibly, more troops will come in later in the day.

While many people blamed President Donald Trump for the attempted coup, he did eventually ask the rioters to go home.

Nevertheless, many Democrats and Republicans believed that his words fell short of the total condemnation that many of them sought from the commander-in-chief.

However, Biden did not hesitate to call out his predecessor and the rioters.

“At this hour, our democracy is under unprecedented assault,” Biden said. “It’s chaos, it borders on sedition, and it must end now. I call this mob to pull back and allow this work of democracy to go forward.”

As a way a way to lower the temperature in America so-to-speak, Facebook and Instagram suspended Trump’s accounts, indefinitely.

In a Facebook post, Facebook co-founder Mark Zuckerberg said, “We believe the risks of allowing the President to continue to use our service during this period are simply too great. Therefore, we are extending the block we have placed on his Facebook and Instagram accounts indefinitely and for at least the next two weeks until the peaceful transition of power is complete.”