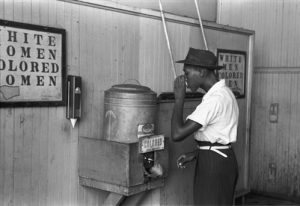 School administrators have disciplined students from Colerain High School in the Cincinnati area for posting racist signs on social media.

The Washington Post reported that students posted pictures on social media of water fountains on the Colerain High School campus with the labels “White only” and “Black only.”

In a statement, the Northwest Local School District (NWLSD) said, “We want to make sure our staff, students, families and community understands where we stand on racial intolerance, discrimination, racism and hatred. We take this matter very seriously. This type of behavior is not and will not be condoned or tolerated. The actions that were displayed do NOT reflect the values and the culture we’ve worked so hard to cultivate in all of our schools across the district.”

Northwest Local School District said they heard about the social media posts on May 5.

The district said that the students who posted the “White only” and “Black only” images left them on social media for less than one minute before taking the posts down.

The district added, “NWLSD stands firm in creating a culture of inclusivity, respect, kindness and compassion for everyone. As a school community, it’s our responsibility to uphold these values, and we will not tolerate any action from anyone that compromises or disrupts that culture.”

Parents of Colerain students received a letter that stated that the district believes that two students posted the discriminatory language on social media and they “issued significant disciplinary action.”

The Grio reported, “The U.S. has seen a resurgence in race-related confrontations over the past year, as tension stemming from the political environment has heightened. Various states have banned the teaching of critical race theory, the legal theory that racism has shaped America, saying it is inherently racist.

“This incident, though, proves that understanding the effects of historical racism is important. The signs posted at the Ohio school are reminiscent of segregation during the Jim Crow era. White and Black people were barred from frequenting the same locales and using the same public utilities.”

Controversial racial behavior, however, has not just come from students this past school year.

In Rochester, N.Y., school administrators placed a White teacher on leave for making Black students pick cotton, while excusing their White classmates from the assignment.

Allegedly, the teacher also placed some Black students in handcuffs and leg shackles as a part of social studies lesson on slavery.

Justin Murphy of the Rochester Democrat and Chronicle reported, “The mothers of two children in different class sections said their children shared the same anecdotes with them this [month], including that the teacher, 20-year Rochester school veteran Patrick Rausch, referred to himself as ‘massah’ and allowed White students in the classes to stop when they complained, but not Black students.”

Precious Tross, mother of Rausch’s student Ja’Nasia Brown, said, “I almost drove off the road. She’s traumatized; she feels belittled. He made a mockery out of slavery. How dare you.”

Tross posted about her daughter’s experience in Rausch’ social studies class on social media, with a picture of a bale of cotton from the class.

In a statement, the school board said, “The district takes these situations very seriously, as descriptions of what occurred in the classroom by the school community are extremely troubling.”

Tross added, “I am a very, very angry parent, and I’m going to stand on all 10 of my toes until I get justice.”

She said that Rausch allegedly made fun of her daughter’s weight, causing her to stop eating breakfast.

Tross said that she is considering legal action against Rausch and the school district.

Initially, Vialma Ramos did not want to believe it when her son Jahmiere O’Neal told her that he had to pick cotton in class.

But when Ramos saw Tross’ post on Facebook, she asked her son more about Rausch, and O’Neal told her about alleged slurs that Rausch used about O’Neal developmental disability.

Ramos said, “I have fought all along for Jahmiere to be included in everything his peers are, and this man degraded him, insulted him and made him not want to be Black.”

Additionally, a Birmingham, Mich. teacher has come under fire for an assignment that compared former President Barack Obama to monkeys.

The high school biology teacher at The Roeper School gave students a handout featuring pictures of primates alongside pictures of the 44th President of the United States.

The Grio reported that the handout required students to look at various pictures of animals and then pick out which ones are primates.

In a letter to parents, the private school said that the assignment was taken from a university website and was racially insensitive and harmful.

The Roeper School has tuition costs of $30,000 annually, with 31 percent of its faculty and students being people of color.

Social media users have criticized the teacher because they feel the teacher had to know how the assignment would be received by students of color.

On The Roeper School’s website the school said, “Justice requires that we respect the dignity and worth of every individual by providing equality of opportunity for those to whom opportunities have been historically denied. At Roeper, we believe that our cooperative community respects and embraces diversity thereby emphasizing the relationship between the individual and the community.”