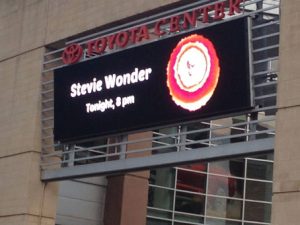 Stevie Wonder stopped by the Toyota Center in Houston for his “Songs in the Key of Life” performance tour on March 20, 2015 (Photo Credit: Regal Media Group/Todd A. Smith).

Some of the best things that happen to entrepreneurs and visionaries happens when they let loose of their control and listen to the genius of others.

Motown Record Corp., and its subsidiary labels, made a name for itself in the 1960s with love songs that resonated with audiences across racial lines and political ideologies.

But sometimes artists get tired playing it safe, and they want to use their art to make a difference in the world.

When Marvin Gaye convinced Berry Gordy to release his magnum opus “What’s Going On,” Gordy’s fear of getting too political subsided a bit and new era of Motown started.

Once the 1970s began, artists like Stevie Wonder and Rick James began interjecting socially conscious lyrics into their music, and a company that many children of the 1970s viewed as corny found the legs to last for decades to come.

RegalMag.com looks back at the Motown Records catalog, ranking the top 10 socially conscious albums of all time from the “sound of young America.”