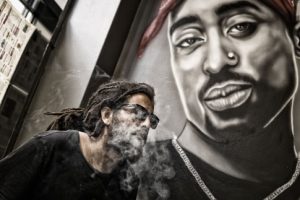 The influence of Death Row Records, and artists like 2Pac, still resonates 30 years after the label’s inception.

When Suge Knight strongarmed Dr. Dre, Michel’le and The D.O.C. away from Ruthless Records, it caused a seismic shift in hip-hop.

No longer did rappers just talk about gangsterism, artists started using street principles to get their desired result in the entertainment industry.

With the formation of Death Row Records, Dr. Dre and Knight created arguably the most iconic and influential hip-hop record label of all time.

Except for Motown Records in the 1960s and 1970s, no urban independent record label could truly boast of having talent on their roster like Dr. Dre, Snoop Doggy Dogg, 2Pac, Tha Dogg Pound and more.

Death Row had the biggest rappers in the industry, the most feared CEO and some of the most unforgettable songs in pop music history.