Ukrainian Crisis Does Not Stop Alleged Racial Discrimination at Border 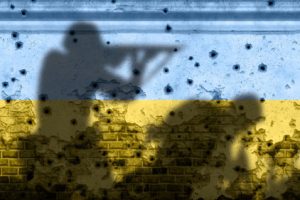 Many African students living in Ukraine have alleged racial discrimination when trying to flee the war-torn country.

While the war in Ukraine has unified and galvanized much of the world, it has not stopped alleged racial discrimination as many civilians in Ukraine rushed to cross the border into neighboring countries as Russian forces invaded.

African students studying in Ukraine have said that they have faced difficulty entering Poland because border officials have prioritized Ukrainians first as it pertains to entering the country.

Other African students have said that they have found difficulty getting onto public transportation to reach the border of Ukraine and Poland.

“Some people have gone to get buses, but they’re not allowing Black people basically onto the buses. They’re prioritizing Ukrainians. That’s what they say,” said Korrine Sky, 26, a medical student living in Ukraine.

As a result, Sky has begun coordinating efforts to get African students out of Ukraine.

Despite her efforts, Sky admits that she is scared.

Sky said, “I’m very, very afraid. We’re not getting any help from any of the embassies. They have pretty much just said, ‘Save yourselves.’”

The stories of African students finding themselves stuck in Ukraine are individual experiences and no one yet has been able to determine which country’s government is responsible for these incidents of alleged discrimination.

Nevertheless, thousands of African students found themselves in Ukraine at the start of the Russian invasion.

Many African students chose to attend school in Ukraine because of the affordable prices.

Ghanaian engineering student Percy Ohene-Yeboah told media outlet Reuters that he too is stuck in the Ukraine in the middle of the ongoing war.

Because of the ongoing fighting, the engineering student has nowhere to go at the present time.

Ohene-Yeboah said, “In a situation like this, you’re on your own. You’ve got to find the best way to find refuge for yourself. It’s now that the reality is really hitting me. I think for me, it’s a bit too late for evacuation and all those things.”

Ohene-Yeboah also told Reuters that he also has received no help from the government in his home country, Ghana.

People Magazine reported, “Russia began an invasion of Ukraine last week, according to Ukraine government, with forces moving from the north, east, and south. The attack is still evolving, but explosions and airstrikes have been reported, with threats mounting against the capital, Kyiv, a city of 2.8 million people.

“While the ongoing conflict between the two Europeans regions intensified, at least 150,000 Ukrainians have fled the country for safety, according to the Associated Press.”

Stephanie Hegarty, a correspondent with BBC, tweeted that on Saturday a Nigerian student claimed that Ukrainian guards at the border between Ukraine and Poland had prevented Black people from crossing the border into Poland.

Hegarty tweeted, “A Nigerian medical student at Poland/Ukraine border (Medyka-Shehyni) told me she has been waiting 7hrs to cross, she says border guards are stopping black people and sending them to the back of the queue, saying they have to let ‘Ukrainians’ through first.

“A student I just spoke with says it was Ukrainian soldiers, not Polish border guards telling him this. Polish border force spokesperson told me Poland is allowing anyone who comes to the Ukraine border entry to Poland.”

Last week, Vukile Dlamini, a student from South Africa, tweeted, “We would have loved to go back home, we can’t the airports are closed, we are evacuating from city to city trying to leave the country on foot or by car.”

Despite trapped Africans allegedly not receiving much support from various governments, rapper Young Thug wants to help African students get out of Ukraine.

Additionally, Young Tug wants to enlist other rappers in helping African students get out of Ukraine.

He took to social media to garner support from other high-profile rappers.

Young Thug wrote, “If some of my rap brothers are in I’m willing to help Africans get out of Ukraine however I can sense (sic) they not letting us pass. Who ever holds the info for these movements please contact me ASAP I’m ready.”

XXL Magazine reported, “According to Reuters today (Feb. 28), at least 102 Ukrainian civilians have been killed since Russia’s attack last Thursday (Feb. 24), with 304 people sustaining injuries. However, there is fear that the real death toll is much higher.”

Despite the death toll, many believe that Russian dictator Vladimir Putin must be disappointed because the war has not gone as smooth for Russia as many had expected.

Although many believed that the perceived superior military from Russia would quickly take over Ukraine, the opposite has happened in many instances.

Despite the deaths and destruction, the Ukrainian military has fought the Russian military back in many instances.

Additionally, Ukrainian civilians have taken arms and Molotov cocktails and volunteered to fight for the resistance.

From young adults to the elderly, from men to women, from beauty queens to the president, Ukrainians have inspired many throughout the world as they put their lives on the line to save their country, democracy and way of life.

Furthermore, Ukrainian President Volodymyr Zelensky has ushered in a new era of warfare, utilizing social media to show his strength and to galvanize and organize the resistance.

Before the Russian invasion, may looked at Zelensky as a young comedian/actor turned politician.

Now, many see him as the epitome of strength, selflessness and leadership.

As the battle continues on the streets Ukraine, talks of potential peace have begun between Russian, Ukrainian and Belarussian political leaders.