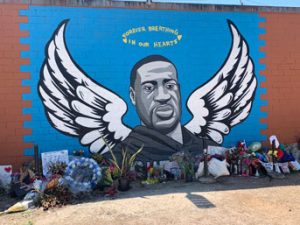 Two former Minneapolis police officers charged in the killing of George Floyd in 2020 have rejected a judge’s plea deal.

Those former police officers will now face trial in October.

“It would be lying for me to accept any plea deal,” said Tou Thau, one of two officers to reject the plea deal.

The Associated Press reported, “Tou Thau and J. Alexander Kueng are charged with aiding and abetting both second-degree murder and second-degree manslaughter in Floyd’s death. They and Thomas Lane were working with Derek Chauvin when he pinned Floyd’s neck with his knee for more than nine minutes as the 46-year-old Black man said he couldn’t breathe and eventually grew still.”

The killing, captured on cell phone video, went viral and led to protests throughout the world condemning police brutality and systemic racism.

Judge Peter Cahill of Hennepin County had given the former officers a short period of time to accept the plea deal before the trial.

The hearing was held on Aug. 15 so the former officers could formally reject Cahill’s plea offer.

“In rejecting the plea agreements, Thao and Kueng are risking state sentences that could be signicantly longer than their federal sentences if they’re convicted on both counts. Assistant Attorney General Matt Frank pointed out in the hearing that the state’s sentencing guidelines recommend sentences of 12 ½ years on the murder count and 4 years on the manslaughter count, but that prosecutors have already said they’ll seek longer sentences if they get convictions.”

However, convicts in Minnesota are known for doing just half of their sentences depending on good behavior.

Plea deal negotiations began in May and continued into June.

The offer would have removed the aiding and abetting murder charges.

Furthermore, the officers’ state sentences would have run concurrently with their federal sentences.

Both defendants have stated that they understand that the state of Minnesota has removed their plea deal offers.

Attorney General Keith Ellison said, “It’s a standard best practice to make a record in court when the State offers a plea agreement, in order to ensure the defendant’s decision is freely and knowingly made. The defendants have a right to decline the offer and proceed to trial. The State is ready for the trial.”

Kueng’s attorney Thomas Plunkett said that Ellison had offered his client a plea deal that would have resulted in a two-year prison sentence.

The former officer confirmed that Plunkett told him about the offer and that he rejected it.

The Associated Press reported, “Thao’s attorney, Robert Paule, said that they, at an unspecified point, proposed a deal for 2 years, but that the state rejected it. (Assistant Attorney General Matt) Frank said that wasn’t how he recalled the discussions, and that his recollection was that Thao’s offer had included dropping the charges. Neither side elaborated on the discrepancies.”

The trial for Thau and Kueng will begin on Oct. 24, with opening statements scheduled for Nov. 7.

Lane pleaded guilty to aiding and abetting second-degree manslaughter in May, thereby avoiding a state trial.

The deal calls for a three-year prison stint.

Lane’s sentencing is scheduled for Sept. 21.

Despite the protests that erupted throughout the world after the murder of Floyd, passage of the George Floyd Justice in Policing Act (H.R. 1280) has remained elusive.

With a one vote advantage in the United States Senate, Democrats have found it difficult to pass several bills almost two years into the administration of President Joe Biden.

“The bill enhances existing enforcement mechanisms to remedy violations by law enforcement. Among other items, it does the following: lowers the criminal intent standard—from willful to knowing or reckless—to convict a law enforcement officer for misconduct in a federal prosecution, limits qualified immunity as a defense to liability in a private civil action against a law enforcement officer, and grants administrative subpoena power to the Department of Justice (DOJ) in pattern-or-practice investigations.”

The bill would limit the use of no-knock warrants.

The Floyd Act would create a framework to stop and remedy racial profiling by law enforcement from the federal level down to the state and local levels.

The George Floyd Justice in Policing Act of 2021 would establish a national registry that would compile data about police conduct (i.e., use of force, office misconduct, and routine practices like stops and searches) in case officers accused of misconduct attempt to get jobs at other police departments.

Additionally, H.R. 1280 “directs DOJ to create uniform accreditation standards for law enforcement agencies and requires law enforcement officers to complete training on racial profiling, implicit bias, and the duty to intervene when another officer uses excessive force,” according to Congress.gov.