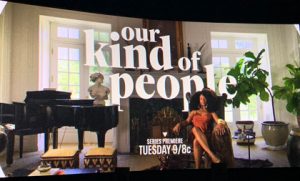 Members of the Houston media got the opportunity to see an advance screening of the new Fox drama, “Our Kind of People” (Photo Credit: Regal Media Group, LLC).

Unfortunately, people in the Black community deal with racism every day in America.

More unfortunately, people in the Black community also deal with discrimination at the hands of people from their own community based on whether they have the right zip code, socioeconomic status or are members of the right social clubs.

Inspired by the book by Lawrence Otis Graham, “Our Kind of People,” which debuts tonight on Fox, brilliantly sheds a light on the classism and elitism that runs rampant in the Black community and sometimes causes as much damage to the culture that racism does.

However, Lee endured criticism when the movie dropped for airing the dirty laundry of the Black community on the big screen for all to see.

In “School Daze,” the light-skinned Black women called the Wannabes had beef with the dark-skinned women, known as the Jigaboos, on the fictional campus of Mission College.

The beef between the two groups of Black women depicted the reality of colorism in the Black community.

“Our Kind of People” deals with the other aspect of discrimination that occurs constantly within the Black community in which Black people from certain prestigious colleges, social clubs and zip codes perceive themselves to be better than their less educated and less sophisticated brothers and sisters.

Like “Tyler Perry’s The Haves and The Have Nots,” the new Fox drama “Our Kind of People” centers on two families from two very different sides of the track.

To harken back to the days of educator and author W.E.B. DuBois, the DuPont and Franklin families represent the talented tenth.

Britannica describes the talented tenth as “the necessity for higher education to develop the leadership capacity among the most able 10 percent of Black Americans.”

At the end of the 19th century and beginning of the 20th century, those Black Americans that became the talented tenth were some of the first Black millionaires, scholars, doctors, lawyers, politicians and civic leaders.

Those in the talented tenth provided an example of what Black Americans could achieve if they got the proper education, had the proper connections and acted with the most civility.

In “Our Kind of People,” the DuPonts and the Franklins have represented the best of the best of what Black America has had for generations.

The DuPonts and the Franklins summer in Martha’s Vineyard.

The DuPonts and the Franklins know all the movers and shakers in Black America.

The DuPonts and the Franklins attend the best HBCUs.

And the DuPonts and the Franklins belong to all the right social clubs.

In the real world, those social clubs include organizations like Jack and Jill, the Links and/or the nine predominantly Black fraternities and sororities that make up the Panhellenic Council.

On the contrary, Angela Vaughn (Yaya DaCosta) comes from the wrong side of the track in Boston.

Her deceased mother worked as a maid for some of the elite Black families that vacationed during the summer on Martha’s Vineyard.

In “Our Kind of People,” Angela was not blessed to be born with a silver spoon in her mouth, more like plastic.

But that has not stopped her from establishing her own successful hair care company or from attempting to elevate her family to the upper echelon of Black America.

When her mother dies, she leaves Angela a boardinghouse on Martha’s Vineyard that Angela hopes will take her business to the next level.

The only question is how did a maid get a deed for a boardinghouse on Martha’s Vineyard in the first place?

Regardless, Angela, a single mother who moves to Martha’s Vineyard with her Aunt Piggy (Debbie Morgan, “Eve’s Bayou”) and daughter, finally has all she needs to transform her family from have-nots to haves.

Or so she thinks.

In “Our Kind of People,” Angela desires to join the right social clubs and attend the right parties, but it is clear to the DuPonts and others that she simply does not belong.

Angela’s daughter, who is trying to escape a checkered past, does not quite get along with Leah’s daughter, Lauren DuPont (Rhyon Nicole Brown, “Empire”).

And since he buys Angela some red-bottom shoes, her admirer Tyrique (Lance Gross, “Crisis”) obviously does not think that Angela has the right footwear to fit it on Martha’s Vineyard.

In the first episode of “Our Kind of People,” secrets concerning the Franklins and the Vaughns will leave viewers desperately wanting more.

What stands out about “Our Kind of People” is that it might represent a changing of the guard for Black television dramas.

Shows like “Empire,” dealt with Black people who participated in illegal activity to boost a career in the entertainment business.

“Our Kind of People” shows Black people who, mostly, made it to the top through education, networking and hard work.

But the fact that “Our Kind of People,” shows much of the internal discrimination in the Black community that usually only occurs behind closed doors might turn off some viewers who feel that Black dramas need to escape all negativity.

And in “Our Kind of People,” some Black Americans are forced to face the music.