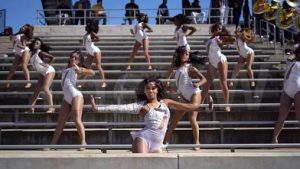 The culture has now become mainstream, and the CW has picked the perfect time to capture the reality of life at Historically Black Colleges and Universities (HBCUs) and RegalMag.com ain’t mad at them for that intelligent decision.

The eight-part docuseries “March” takes a personal look at the stars behind the super popular HBCU band scene, specifically the “Marching Storm” band and “Black Foxes” dance team at Prairie View A&M University in Prairie View, Texas outside of Houston.

By taking such a personal approach to the leaders and former members of the band, “March” showcases what every HBCU student, fan and alum already knows, and that is at HBCUs the bands are the headliners and the football teams are the opening acts.

At HBCUs, the band culture is probably totally different than at some predominantly White institutions (PWIs).

In movies like “American Pie,” band members received the label of band geeks because they often were the outcasts, invisible to their more popular peers like the pretty girls and the jocks.

The comedy classic “American Pie” depicted the band geeks as nerds and socially awkward individuals that could not sit with the cool kids at lunch or receive invitations to house parties at the homes of the popular kids.

At HBCUs, band members are the cool kids.

Along with athletes and members of the nine predominantly African-American fraternities and sororities, affectionately known as the “Divine Nine,” the band members are recognized and highly respected throughout the campus, known as “The Hill,” at Prairie View, and throughout the HBCU scene.

In fact, fans even stay after the games for the “fifth quarter,” which is in essence another battle of the bands where both bands go back forth in the stands to see who reigns supreme that night.

HBCU bands even have a ranking like the polls that determine the best college football teams every year.

The problem for members of the Prairie View band in “March” is that The Undefeated, an ESPN online publication dedicated to Black sports and culture, ranks the “Marching Storm” as the eighth best HBCU marching band in the land.

The docuseries “March” focuses on the band members dedicating themselves to proving The Undefeated wrong while also preparing for their distinguished alumni to return to “The Hill” for homecoming weekend, which for HBCUs is equivalent to the world’s biggest family reunion, including students, graduates, locals, alumni from rival schools as well as celebrities.

“March” has much in common with past reality shows that depicted life at HBCUs like “College Hill” that started at SWAC rival Southern University in Baton Rouge, La. (which is the backdrop of some of the scenes in “March”) and ran for six seasons on BET.

The docuseries on the CW highlights the unique culture at HBCUs in general and HBCU band culture in particular.

But like “College Hill,” the docuseries “March” humanizes the stars of the show as they deal with everyday life and problems in addition to spending countless hours away from friends and parties while focusing on the routine for the next halftime show.

And like all young adults, the stars of “March” must deal with timeless issues such as single parenting at a young age, maintaining friendships while in school, running businesses while still in college, etc.

But the stars in “March” must also deal with new age problems like cyberbullying, which has led to two members of the “Marching Storm” losing their coveted spots in the marching band and desperately trying to get back in the good graces of stern and demanding band director, Dr. Zachery who runs the “Marching Storm” like a military regimen.

The universal issues that all will relate to and the focus on HBCU culture at a time of heightened popularity for those colleges, provides “March” the perfect timing to march right into living rooms and hearts across the country.

Fortunately, “March” will give non-HBCU experts a crash course on the wonderful culture and customs that exist on those campuses.

However, some of the information contained in “March” will be old news for HBCU students and alumni who have prior knowledge of the HBCU culture.

Thankfully, “March” appears to stay away from some of the more stereotypical images shown when mainstream media attempts to depict urban Black life via documentaries and reality shows.

That show hit on all the stereotypes of urban Black life like gun violence during a game with rival Smiley High School (now North Forest High School), a game that locals referred to on camera as the “Nigga Bowl.”

Staying away from the stereotypical tropes and showing the diversity of Black culture sets “March” apart from stereotypical portrayals while also portraying the characters as true human beings, flaws and all.

The docuseries “March” will then move to Sundays at 9 P.M. ET/PT starting on Feb. 27, after “All American” and “All American: Homecoming” take over Mondays on the CW.