The Calm Before the Storm: Regal Chats with Prairie View Drum Major Aaron from ‘March’ 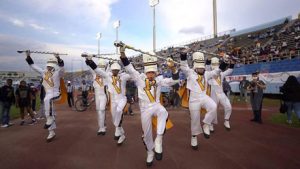 The culture will be televised on Mondays, beginning tonight (Jan. 24) at 8 P.M. ET/PT, on the CW before transitioning to Sundays at 9 P.M. ET/PT on Feb. 27 in the form of the new eight-part docuseries, “March.”

And the culture is the phenomenon known as HBCU (Historically Black Colleges and Universities) bands, particularly the “Marching Storm” from Prairie View A&M University (P.V.) in Prairie View, Texas.

RegalMag.com publisher Todd A. Smith recently linked up with P. V. drum major Aaron Best to talk about what it takes to make it in the “Marching Storm,” competing for the top spot amongst HBCU bands and appealing to all age groups when it comes to song selection and routines.

Regal: Describe the Marching Storm’s style and what separates Prairie View from other HBCU bands.

Aaron: Our style from the marching aspect is very militant based…very military style…tight corners, tight angles, flash, flair. Everything needs to look good, sharp and quick and accurate. As far as a drill standpoint, we are pretty technical. We do a lot of picture drills that involve perfect placement on the field from every member. We don’t do a lot of line drills. We don’t do a lot of bouncing off and stuff like that. We make sure that we try to include a lot of different maneuvers that usually aren’t really utilized by a lot of HBCU marching bands.

Regal: How demanding is it working for director of bands Dr. Timmey Zachery? You mentioned PV’s militaristic style and the “March” describes Dr. Zach as running the band as if it was the military. So what can a high school graduate expect from him if they join PV’s band?

Aaron: Well, you can expect, one, definitely a disciplined environment… Dr. Zachery is ex-Navy. (The) entire band understands that he’s there for business. You don’t talk, you listen until you’re spoken to. You don’t move, unless he tells you, “go.” But as long as you can follow simple instructions and be attentive, then you’ll have a fun experience because it’s always going to be fun.

Regal: How many hours per day or per week is required for each band member and band leader?

Aaron: As far as the average band member on a normal [day], we have practice scheduled everyday Monday through Friday from 5:30 to usually around 10:00, 11:00 (P.M.). So we’re talking roughly five, six hours a day, five days a week. We’re around 25 hours [per week], not including games on Saturdays or events that we might have to do… It’ a whole lot and then a drum major, we practice before and after practice to make up these routines or to make up the extra stuff that we do…

Regal: I’m glad that you mentioned coming up with routines. How much influence do drum majors and other leaders have with Dr. Zachery when it comes to routines and song selections?

Aaron: We have a very unique experience here because Dr. Zachery, he doesn’t really do a lot of the music…He’s more so (our) pedagogy or musical information guy. He’ll come in and he’ll clean things up, make sure things are the way they are supposed to be from an educational standpoint… We have a director who is more so over writing the music and selecting the music and that would be Brandon Hopkins and also Ralph Chapman, who is more of our older selection or R&B selection writer…Hopkins, he’s one of our youngest directors. He’s our writer, or main writer, and he actually takes a lot back from us, from the students. I think I sent him about four or five songs that we wrote from this year alone.

Regal: How do you all select the songs for homecoming when you have people from so many different age groups coming back to campus?

Aaron: A performance always slightly impacts the type of music that we will bring to the performance because you always want to appeal to your crowd in a spectator sport like marching band. The crowd is basically the ones who pick who’s on top of it. It might not happen in the stadium per se but through social media, we know people will select who they think did the best.

Regal: Who is PV’s biggest friendly rival when it comes to marching bands in the SWAC (Southwestern Athletic Conference)?

Aaron: The biggest friendly rival is definitely Texas Southern because we make so much noise when it comes the Labor Day Classic time…And honestly, as of lately, the last couple of years, I can say we’ve been slowly building a friendly rivalry with Jackson State as well.

Regal: What type of response do you get when you perform at a predominantly White institution (PWI) like Texas A&M because a lot was made of some hateful signs that some of the Aggies displayed saying a degree from PV was worth less than the sign they displayed?

Aaron: They always receive us well. This is my second time actually going to Kyle (Field) to perform. And both times I went, after we perform, even before we perform, social media is lit up. All the A&M people, they’re talking about us, ready for halftime. They didn’t move. Nobody moved from their seat when halftime started. They all were attentive, and they paid attention to the show. Now, do they appreciate us coming out there and doing what we do? Yes, because we are entertaining them. But as far as the pre-antics that you were talking about, the signs and stuff like that, we all (are) young adults and sometimes we don’t understand the backlash of some things we do. I don’t think those students understood, they were playing, one, an HBCU. And two, the history behind our two schools doesn’t make it any better…And we didn’t even respond. Every bus rolled right past that sign. We all saw it when we came in. But we didn’t respond to it because we’re not those people. We don’t stoop to that level…

Regal: What do you think of allegations from HBCU alumni that bands from PWIs have culturally appropriated the style of HBCU bands?

Aaron: We as African-Americans have an issue with ownership, and it’s only because a lot of things that we have created and thought we were going to own were ripped from us throughout history. We have an issue with ownership naturally, so I can understand where that comes from. However, I look at that like rap music (and) Eminem is one of my favorite rappers. So, If you’re a good band, it doesn’t matter what music you’re playing, if you’re playing it good, I’m going to enjoy it.