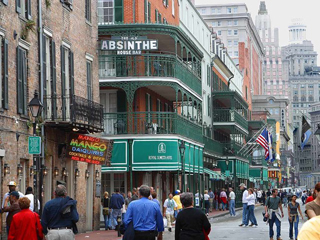 New Orleans made the list of the top 10 American cities to visit this summer.

Cue up “Summertime” by DJ Jazzy Jeff and the Fresh Prince, a classic song that still bumps to this day 30 years after its release.

The summer months have always represented a time for relaxation and exploration.

However, summer 2021 might mean more to people because that doggone coronavirus ruined any chance for an enjoyable summer 2020.

As airports fill up and as the vaccine gets into arms, Americans are leaving their homes to visit new locales, hopefully on their best behavior and not attacking airline workers.

But where are people going?

LawnStarter released a list of the top 10 cities to visit this summer.

To determine the top cities to visit during summer 2021, Lawnstarter compared the nation’s 200 biggest cities based on 30 factors of fun and safety that included, among other things, the cost of taxicab rides, Airbnb rental rates and the number of attractions in that city.

But Americans have endured enough negativity over the last year, so let’s not focus on the worst cities to visit during summer 2021.

Furthermore, RegalMag.com staff members believe that Memphis is a bomb destination to visit.

But what does the Regal staff know anyway, right?

Therefore, let’s focus on the best cities according to LawnStarter, and the attractions to enjoy and the things to do in those cities.

San Francisco—Who doesn’t want to visit the Golden Gate Bridge on a visit to San Francisco? For those that love crime stories, a visit to Alcatraz would be dope. Make sure to take a trip on the famous cable cars. For the history buffs, check out the Haight-Ashbury neighborhood made famous by the hippie movement.

Portland, Ore.—Portland, Ore. does not have a Golden Gate Bridge, but the city has the St. Johns Bridge. Also, check out the Portland Saturday market, the elephant exhibit at the Oregon Zoo and Tilikum Crossing.

Washington—The nation’s capital is the mecca for history buffs. But it’s especially that for those who love African-American history. Please check out the mecca of Historically Black Colleges and Universities, Howard University. Definitely check out the monument to Martin Luther King, Jr. Then check out the National Museum of African American History and Culture. Finally, visit historic Ben’s Chili Bowl for an evening meal.

Honolulu—Visiting Honolulu is easy. Just chill out on the beach and watch the beautiful people pass you by. But also check out Diamond Head, a dormant volcano, Iolani Palace, Pearl Harbor and Pearl Harbor National Museum and the Honolulu Zoo.

Jersey City, N.J.—History buffs will love Jersey City, N.J. Places to visit include the Ellis Island Immigrant Building, which housed immigrants from Italy in the early 20th century. Swing by New York City on the Staten Island Ferry. Pay your respects to New Jersey residents who lost their lives on Sept. 11 by visiting Empty Sky Memorial. Then take it easy by checking out Lincoln Park for outdoor fun and to check out the wildlife.

Seattle—When you touchdown in Seattle, put on some grunge music like Pearl Jam and Nirvana and visit the Museum of Pop Culture. Then check out the famous Space Needle before swinging by the Pike Place Market to see the merchants throw fish around. After that, check out the Woodland Park Zoo and the Seattle Art Museum. In the evening, check out a Seattle Mariners baseball game at T-Mobile Park.

Las Vegas—“Sin City” is usually enjoyable. However, the people who picked Las Vegas for the best cities to visit during summer 2021 obviously did not check the weather reports. It’s so hot in “Sin City” that visitors will probably think they are visiting Hell because of their sins. Nevertheless, many of the shows are back. So in between winning (or losing) money in the casinos, check out Usher, Bruno Mars, the Purple Reign Prince tribute show and the Michael Jackson MJ Live tribute show.

New Orleans—Where do we begin with things to do in the “Big Easy.” Bourbon Street. Canal Street. Jackson Square. Café du Monde. Xavier University. SUNO (Southern University at New Orleans). Dillard University. There is something for everyone. Too bad Zion Williamson has not led the New Orleans Pelicans to the NBA playoffs yet because if he had the Smoothie King Center would make the list as well. But while things have opened after the coronavirus pandemic, all is not normal until the Essence Music Festival returns to the Mercedes-Benz Superdome for Fourth of July weekend.