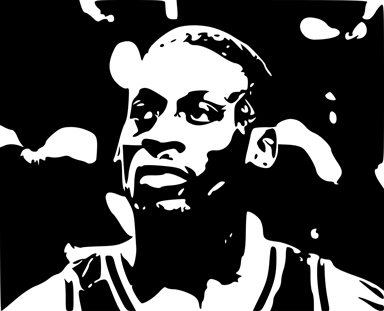 During his tenure with the Detroit Pistons, Dennis Rodman’s energy off of the bench was contagious for the Motor City Bad Boys.

Bringing Heat off the Bench

With the retirement of one of the best sixth men in NBA history, Manu Ginobili of the San Antonio Spurs, and the possibility that future Hall of Famer Carmelo Anthony might come off the bench for the Houston Rockets, the staff at RegalMag.com began debating the best reserves in NBA history.

It is too difficult to label every key reserve as a sixth man because some of the greatest in the history of the game came off the bench as the seventh or eighth man like Dennis Rodman and John Salley of the championship Detroit Pistons teams of the late 1980s and early 1990s.

Reserves usually do not get the credit that they deserve because without a deep bench some of the most iconic NBA teams would have gone without a championship.

Could you imagine the Houston Rockets of the 1990s winning back-to-back championships without the contributions of a young Sam Cassell?

Would the Showtime Los Angeles Lakers have won five championships in the 1980s without the defense of Michael Cooper?

And some forget that Boston Celtics great Kevin McHale started his career as a sixth man because he played behind another Celtics icon in Cedric “Cornbread” Maxwell.

Therefore, since some benchwarmers definitely brought the heat for some of the greatest teams in league history, RegalMag.com would like to honor the 10 most fire reserves (in no particular order) in NBA history.

The list only deals with specific times in these athlete’s careers when they came off the bench on a regular basis.

Vinnie Johnson (Detroit Pistons)—“The Microwave” might have been the greatest Baylor Bear to ever lace up some sneakers, no disrespect to Terry Teagle. During the Pistons’ first championship season (1988-89), Johnson averaged 13.8 points per game. During the second championship season (1989-90), the Baylor product averaged almost 10 points per game.

John Havlicek (Boston Celtics)—During the Celtics’ dynasty years in the 1960s, “Hondo” became known for his unmatched endurance, which wore opponents into the ground, along with his skills as a scorer, defender and ball handler. He also had a knack for making big plays in championship situations. Who could ever forget Celtics radio personality Johnny Most’s call of Havlicek stealing the ball and knocking it over to Sam Jones to seal another ring for the boys in green and white?

Kevin McHale (Boston Celtics)—Imagine a team so talented in the frontcourt that a young McHale had to come off the bench on the 1980-81 championship team. However, when your starting frontcourt consists of Maxwell, Larry Bird and Robert Parish that’s what happens. Nevertheless, the eventual two-time NBA Sixth Man of the Year winner averaged 10 points per game and 4.4 rebounds per game as a rookie on the 1980-81 championship Celtics.

James Harden (Oklahoma City Thunder)—If old heads think the Celtics of the 1960s and 1980s had an exorbitant amount of talent with Havlicek and McHale coming off the bench, look at the Oklahoma City Thunder from this decade, which featured three eventual MVPs in Kevin Durant, Russell Westbrook and Harden. The team had so much talent that Harden was Westbrook’s backup. During the 2011-12 season when the Thunder lost to the Miami Heat in the NBA Finals, the Arizona State product averaged 16.8 points per game, 4.1 rebounds per game and 3.7 assists per game.

Dennis Rodman (Detroit Pistons)—“The Worm” became a worldwide phenomenon with his bizarre antics in the 1990s. But during the late 1980s, his energy became contagious for the Motor City Bad Boys. Statistics cannot fully portray what Rodman meant to the Pistons with his defense and hustle. But even as a young and skinny small forward, he still averaged nearly 10 rebounds per game during the Pistons’ championship run.

Manu Ginobili (San Antonio Spurs)—With his recent retirement, it’s going to be odd watching the Spurs on TNT and not hear Charles Barkley yell out, “GINOBILI!” However, the swingman from Argentina left basketball fans with some great memories, several NBA championships and a gold medal in the Olympics. Although he started at times and came off the bench sometimes, he always provided instant offense and energy during the Spurs’ dynasty. For his career, Ginobili averaged 20 points per game and almost four assists per game.

Michael Cooper (Los Angeles Lakers)—Long legs. High socks. Set shot. Michael Cooper. “Coop” did the dirty work for the Showtime Lakers off of the bench. Cooper’s career stats might not jump off of the sports page of the newspaper (8.9 points per game; 3.2 rebounds per game and 4.2 assists per game), but he was like that Swiss army knife for five championship teams, doing everything for the purple and gold during its most glorious run.

Sam Cassell (Houston Rockets)—By the time Cassell made it to the Rockets in 1993, the starting point guard spot belonged to Kenny Smith. However, that did not stop the streets of Houston from thinking that Cassell could ball better than Smith. But coming off the bench for the Rockets’ only two championships (1993-94 and 1994-95), Cassell had big game after big game such as Game 7 of the 1994 conference semifinals against Phoenix, Game 3 of the 1994 NBA Finals against the Knicks and Game 2 of the 1995 NBA Finals against the Magic.

Jamal Crawford (Atlanta Hawks; Los Angeles Clippers)—Jamal Crawford has to make the list of the top reserves in NBA history because he is the only player to win the NBA Sixth Man of the Year Award three times. Crawford has played for multiple teams, but his time with the Clippers probably remains the most memorable of his career, winning the Sixth Man Award twice. For his career, Crawford has averaged 15 points per game.

Jason Terry (Dallas Mavericks)—The JET, Jason Terry has played on many teams and has always provided a scoring punch. However, his time with the Dallas Mavericks goes down as one of his best stretches because of the defense he played on the much bigger LeBron James in the NBA Finals. After his career is over, people probably will still visualize him hitting a three-pointer, then spreading his arms like a jet ready for takeoff.