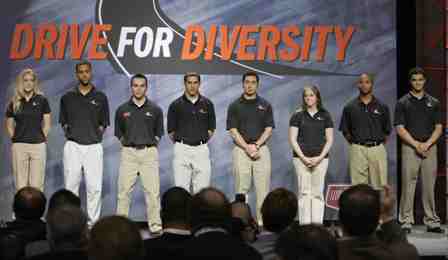 Despite the popularity of the sport, NASCAR has often been described by critics as a White man’s sport.  With the exception of a few trailblazers, such as ESPN NASCAR analyst and former NBA All-Star Brad Daugherty, most coverage of racing includes very few faces of color or women.

However, NASCAR diversity has been at the top of the sports agenda for the past six seasons as a result of its Drive for Diversity initiative.  The program seeks to develop minority and female drivers and crew members and give them the opportunity to compete against established NASCAR talent.

One such individual taking advantage of NASCAR diversity is 19-year-old racing sensation Michael Cherry, who is in his second year in the Drive for Diversity program and recently received sponsorship from Nationwide Insurance.

“It’s an honor to support Michael Cherry as he works his way up in NASCAR,” said Nationwide agent Carlo White.  “This sponsorship is a good opportunity for Nationwide to support diversity in racing, and that’s something that is very important to us.  Michael is a very promising young racer and will be a great representative of the Nationwide Insurance brand.”

Despite the efforts of Nationwide, NASCAR diversity has become a critical issue since fired NASCAR employee Mauricia Grant filed a $225 million lawsuit against the racing league in 2008, claiming racial and sexual discrimination, sexual harassment and wrongful termination.

Grant, a Black female, said of her NASCAR experience: “I loved it.  It was a great, exciting, adrenaline-filled job where I worked with fast cars and the best drivers in the world.  But there was an ongoing daily pattern [of harassment].  It was the nature of the people I worked with, the people who ran it, it trickled down from the top.”

After Grant filed the lawsuit, NASCAR spokesperson Ramsey Poston emphasized the dedication to NASCAR diversity and a zero tolerance policy for any form of harassment.  “As an equal opportunity employer, NASCAR is fully committed to the spirit and letter of affirmative action law,” Poston said.  And they are optimistic that the Drive for Diversity initiative and Nationwide’s sponsorship of Cherry will accomplish their goals of diversity.

“We’re pleased to see Michael, and promising young drivers like him, earn the opportunity to take their racing careers to the next level,” said Max Siegel, CEO of the managing group in charge of the diversity initiative.  “The goal of NASCAR’s Drive for Diversity initiative is to create meaningful opportunities for a wide range of drivers to compete in NASCAR.  Nationwide Insurance will be a great partner for Michael because they have a proud tradition of supporting NASCAR and diversity in general.”

Cherry, a Valrico, Fla. Native, finished fourth in the point standings during his rookie year in 2008.  He will race for the Addis Motorsports at Greenville-Pickens (S.C.) Speedway.  Cherry said, “It’s truly an honor (to) represent Nationwide Insurance.  The addition of their sponsorship to our Addis team and the Drive for Diversity initiative really makes this an unbelievable opportunity for me.  I definitely plan to make the most of it.”

In addition, the world of auto racing plans to make the most of NASCAR diversity and become a sport everyone can enjoy and celebrate.

Smith is the publisher of Regal Black Mens Magazine.