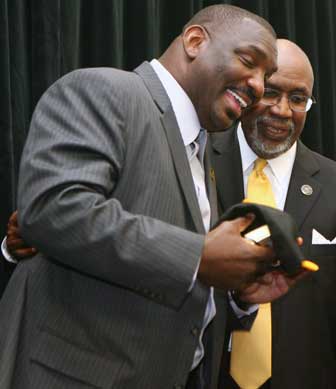 The announcement was given in front of a packed house at the Eddie Robinson Museum. The overcrowding of students, faculty and alumni gave little question whether they supported Williams’ return to the HBCU (Historically Black Colleges and Universities).

Athletic Director Lin Dawson said that he was excited in welcoming back one of Grambling’s favorite sons. He also stated that they are looking forward to an era of championship football.

The Tigers’ 2010 campaign to the SWAC Championship vanished when they lost in overtime against the eventual champion, Texas Southern.

The Jackson State University (JSU) football team learned recently it may face a postseason ban due to a repeated academic violation.

The athletic program’s membership may be limited in 2012 if the NCAA does not grant a waiver request from the school asking for a reprieve.

The JSU football team’s Academic Progress Rate (APR), a rolling, four-year figure that calculates academic performance, has fallen below a critical benchmark for the third straight year, according to documents obtained recently by The Clarion-Ledger through a public records request.

It puts the program in part three of the penalty phase which is a postseason ban. The final step is the loss of NCAA membership. Preliminary reports show that the school will be banned from postseason play when the figures are released in May and are on track to lose NCAA membership in 2012.

The APR is calculated by awarding each athlete one point for staying in school each semester and another for remaining academically eligible.

The loss of membership means that the Jackson State athletics wouldn’t be recognized as a Division I program. JSU interim athletic director Robert Walker said that they are working hard and providing information and documentation that has been requested of them.

According to documents, 16 of Jackson State’s 18 athletic teams are above the 900 mark and 14 of those are above 925. Football and baseball are under 900. Furthermore, SWAC commissioner Duer Sharp says that the SWAC presidents would have to vote to ban JSU from the championship game — a likely scenario if the NCAA hands down the postseason ban.