Racism in Soccer Rampant in The Ukraine, Poland 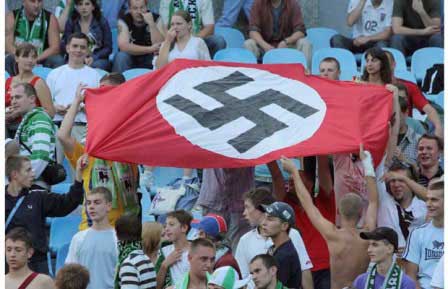 Religious intolerance and racism in soccer are very prevalent at European matches.

Bracketed by two gigantic oceans, many Americans have a provincial view of the world, including racism. We tend to look at racism through red, white and blue tinted glasses and ignore what goes on in the rest of the world.

It should not be surprising to discover that racism exists in many heterogeneous cultures and, according to a report from the British Broadcasting Corporation (BBC), is publicly manifesting itself in European professional soccer matches.

The report stated that such behavior is especially prevalent in the countries scheduled to host the Euro 2012 Championships this summer. Those countries are Poland and The Ukraine.

Asian students were also shown being attacked at Metalis Stadium in Kharkiv, one of the host venues.

Former England captain Sol Campbell said in the program broadcast Monday in Britain that fans should not travel to those countries because “you could end up coming back in a coffin.”

Racism in soccer is not limited to Poland and The Ukraine. Racist chants in stadiums in Italy and Spain last weekend brought African players to tears.

On Sunday, Messina’s Ivory Coast defender Marc Zoro threatened to walk off the field after fans of his team’s opponents, Inter Milan, repeatedly hurled racial epithets at him.

Two Espanyol of Barcelona players, the Cameroon goalkeeper Carlos Kameni and the Brazilian midfielder Fredson, were subjected to racist chants in Madrid by fans of opponent Atletico Madrid.

Though hardly a new problem in the Spanish and Italian leagues, both European soccer’s governing bodies, as well as the European Parliament, have promised to throw the book at violators and disperse the dark cloud hanging over European soccer.

“We are prepared to implement the necessary sanctions, from fines and closure of stadiums, and even to not allow teams to participate in competitions,” said Per Ravn Omdal, the vice president of UEFA.

EU legislators are proposing a law that could stop games in which players are racially abused as well as punish the guilty clubs and national federations.

Persistent offenders will be permanently removed from competition, should the new law go through. If more than half of the EU parliament signs the declaration, it will become a resolution with the possibility of becoming law.

As for the Euro Championships, officials from Poland and The Ukraine say that the BBC documentary overstated the problem of racism in soccer and that they will have the situation under control by the time their event begins.

Ukrainian Foreign Ministry spokesman Oleh Voloshyn said in the Washington Post that the program was unjust and smacked of arrogance and xenophobia, portraying “Eastern Europe as mentally not equal to the rest of Europe.”

“We believe this report is outrageous, done in the best traditions of Soviet journalism,” Voloshyn said. “Ukraine is one the leaders in Europe in terms of religious and racial tolerance.

“Nazi symbols can be seen at … any match in England, but does it mean that fans should not come to London for the Olympics?”

“From UEFA’s point of view, I see no threats for citizens of various nationalities to stay in Ukraine,” Lubkivsky was quoted as saying by the Interfax news agency. He added Campbell’s statement was “vexing” for Ukraine.

In Poland, the government body that is organizing Euro 2012 called the accusations of racism in soccer “unjust,” stressing that Poland has zero tolerance for racism and xenophobia.

“The problem of stadium pathologies, such as xenophobia or racism, is a problem specific to the whole of Europe and not only to Poland,” said Mikolaj Piotrowski, a spokesman for the body. “As in every European country, it affects a small minority of those present at the stadiums — unfortunately, a minority that is usually loud and visible in the media.”

Soccer fans have a reputation for fanaticism that far exceeds that of American football, basketball and baseball fans.

By and large when visiting fans take over a stadium like Red Sox fans often do at Baltimore’s Camden Yards, there may be some good natured ribbing or a minor fight or two but nothing like the arrests and property damage that routinely occur in Europe with soccer fans.

Unfortunately, this more overt enthusiasm has manifested itself in racism in soccer.

Regal is anxious to see how the governing bodies in Europe handle these problems at both the Euro Championships and London Summer Olympics. The world will be watching.