Is Jozy Altidore the Next Soccer Superstar? 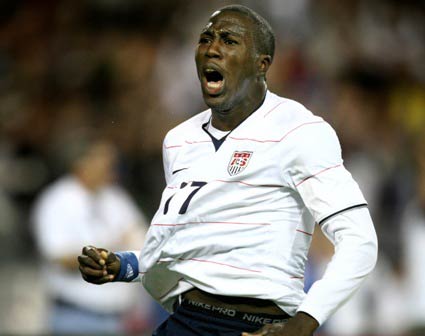 The Next Big Thing?

Jozy Altidore is still six months from turning 20, and Altidore has spent most of his late teens setting soccer records, not the least of which was the $10 million transfer fee Major League Soccer earned when he moved from the New York Red Bulls to Villarreal of Spain’s La Liga (top) division in June of 2008.

Jozy Altidore told the New York Times at the time of the deal that it was a big thrill. “I’m just excited about a new challenge,” he said at the time. “And whether I stay with Villarreal or get loaned out, I’m excited to be going to play at a higher level.”

Jozy Altidore may be what the U.S. soccer movement has lacked in its quest to gain recognition as an American sport at least on the level of the NHL, if not football, baseball and basketball. “We’re still waiting for that great American striker to emerge,” U. S. National goalkeeper Kasey Keller told Reuters at last year’s World Cup, where U.S. forwards couldn’t manage a single goal. “That guy that Real Madrid has to have and will pay 30 million euros for, the guy who then goes on to lead the La Liga in scoring for three or four years in a row.”

Is Jozy Altidore that guy? He first stepped into an MLS match on Sept. 9, 2006. A week later, just 18 minutes into his career, he announced his arrival with a 30-yard screamer that sailed into the top right corner of stunned Columbus Crew goalkeeper Bill Gaudette’s net, reported Doug McIntyre of ESPN.com. Yet, less than a year after his sale to Villarreal, he was loaned to Xerex of Spain’s second division after scoring just one goal in six matches for the first division club.

On Villarreal’s website, Jozy Altidore endorsed the demotion. “This is a good opportunity for me because I will be able to get more playing time which will help me adapt to this country and continue to develop my career,” he said. Villarreal general manager Jose Manuel Llaneza added that, “The club is interested in Jozy playing and proving himself. This wasn’t an important move economically, but more a sporting move.”

Demotion aside, he is clearly on the upswing in the eyes of the U.S. Soccer establishment. His national team jersey is listed as among the top three most popular jerseys in terms of sales along with Landon Donovan’s and Michael Bradley’s on the Just Soccer Jerseys website. The large transfer fee to Villarreal has captured fans’ imaginations, and his picture was featured on the cover of the Electronic Arts FIFA Soccer 2008 video game.

“At EA Sports we believe in identifying the most talented up-and-coming athletes in the world to help us develop the most authentic sports games,” said Romain Rossi, Director of Marketing for EA Sports at GameDaily.com. “We believe Jozy Altidore is one of the next great American soccer stars.”

If the bottom line in the U.S. is money, then jersey sales and video game covers offer ample evidence that Altidore is the next big thing in American soccer, even if he is struggling a bit in Spain.