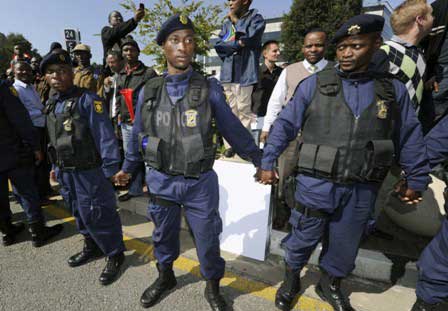 Security will be tight at soccer World Cup in Johannesburg (Kyodo via AP Images).

On June 17, at the 2010 Football World Cup put on by the Fédération Internationale de Football Association (FIFA), 32 nations will come together in a celebration of the highest level of the world’s most popular sport, soccer. They will do this in South Africa, a country infamous for sanctioned apartheid, perhaps the vilest form of segregation against Blacks.

Starting in 1948, the Nationalist Government in South Africa enacted laws to define and enforce segregation. With the enactment of apartheid laws in 1948, racial discrimination was institutionalized. The effect of the legislation was invariably favorable to the Whites and detrimental to other race groups.

The state passed laws which paved the way for “grand apartheid,” which was centered on separating races on a large scale, by compelling people to live in separate places defined by race. South Africa’s isolation in sport began in the mid 1950s and increased throughout the 1960s. Apartheid forbade multiracial sport, which meant that overseas teams, by virtue of their having players of diverse races, could not play in South Africa.

The social and economic affects of apartheid are obvious. The greatest impact, however, might be psychological. According to the International Journal of Social Psychology, “the disruption of family-life by the enforced migrant labor system; the stunted brain-development and behavioral effects that result from the inexcusably widespread childhood malnutrition in that wealthy country, (the world’s 6th-largest food-exporter); the distortions and alienations in personality development, on racial lines; the mental breakdowns and suicides that result from the physical and mental torture that uncharged security-police detainees are subjected to while under interrogation” ruined generations of Blacks in South Africa.

Though apartheid officially ended in South Africa in a series of negotiations from 1990 to 1993, culminating in elections (of President Nelson Mandela) in 1994, holding the 2010 Football World Cup in the country is troubling to some. Chris Rodrigues of the United Kingdom Guardian said, “It’s already the most unequal country on the planet. Now ‘the greatest marketing opportunity of our time’ is making it worse.” Rodrigues cited the country’s societal inequities in making his claim.

“While 2010 Organizing Committee CEO, Danny Jordaan, compares the staging of such an event to a “second liberation,” we shouldn’t be surprised if those who are struggling for a meaningful notion of citizenship continue their public protests during the tournament,” Rodrigues continued. “Undoubtedly, they will be deemed unpatriotic for disrupting the whole PC-PR-Potemkin village atmosphere. They will horrify the press whose accreditation with FIFA hangs on not engaging in conduct that detracts from the sporting focus. The police will, as is routine, shoot at them with buckshot, rubber bullets and tear gas.”

South African officials are more sanguine. According to its official information site, the 2010 Football World Cup is an important step forward for the nation:

“It has been 16 years since the huge step was taken to allow all people of South Africa a meaningful say in the manner in which the country is governed.

In those years tremendous progress has been made, but more time is needed to balance the opportunities on offer for all; one-and-one-half decades is not enough time to overcome the inequalities of South Africa’s past.

Now, though, the financial impact and possibilities the 2010 World Cup offers creates an opportunity to speed up the process that will truly allow all South Africans an equal opportunity to excel with hard work.”

Only time will tell if FIFA’s decision to allow South Africa to host the 2010 Football World Cup will be like the world’s experience with the 1936 Berlin Olympics or a high-profile step towards helping our ancestral continent become a more serious player on the international stage.