Regal’s Top 10 Coaches of All Time 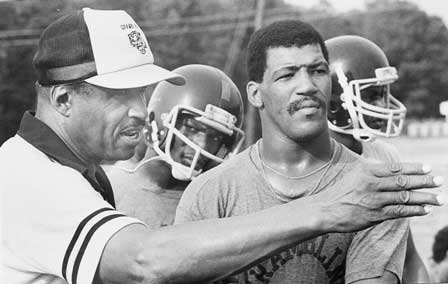 When you look at the top 10 coaches of all time among African Americans, you have to first look at coaches who blazed the trails for the most famous and successful top 10 coaches today.

The National Football League (NFL) or the American Professional Football Association (APFA) as it was called at the time, has the honor of hiring the first African American head coach in any sport. In 1921, Fredrick Douglas “Fritz” Pollard was named coach of the Akron Pros in 1921 and the Hammond (Ind.) Pros. Pollard was the first African American inducted into the National College Football Hall of Fame in 1954 and the Pro Football Hall of Fame in 2005. Pollard may not be among the top 10 coaches of all time, but he certainly left his mark on the game for other African American top 10 coaches. The Fritz Pollard Award is given by the Black Coaches & Administrators (BCA) each year to the best college or professional coach. Sadly it would be 58 years before an NFL team would hire another African American – Art Shell of the Los Angeles Raiders.

When you talk about great coaches such as Joe Paterno, Bobby Bowden, Amos Alonzo Stagg and Paul “Bear” Bryant, the great Eddie Robinson has to be listed next to them on any list of top 10 coaches. From 1941-1997, Robinson compiled a 408-168-15 record at the historically Black university, Grambling State in Northern Louisiana. At Grambling State, he had 45 winning seasons, 17 Southwestern Athletic Conference championships and nine Black College Football National Championships, and more than 200 players sent to the NFL and Canadian Football League; three went on to the Pro Football Hall of Fame. Robinson was immediately inducted into the College Football Hall of Fame upon his retirement. After struggling with Alzheimer’s disease, Robinson died on April 3, 2007 in Ruston, La. Since 1987, the Eddie Robinson Award is given annually to the nation’s top Division I Football Subdivision (formally Division I-AA) head coach.

K.C. Jones reached the NBA Finals for the first time as head coach of the Washington Bullets in 1974-75 losing to the Golden State Warriors. He would return to the finals eight seasons later for the first of four straight appearances with the Celtics, winning two championships in 1984 and 1986. Jones is the only African American coach with four straight championship appearances in any sport, and the most overall with five. He is one of the most decorated African American players and coaches in history, and maybe one of the most overlooked. Jones was inducted into the Naismith Memorial Basketball Hall of Fame in 1989 and had his number 25 jersey retired by the Celtics in 1967. Jones finished his coaching career with the Seattle Supersonics early in the 1991-92 season. He compiled a 603-309 record, reaching the playoffs in every season except his last. Jones currently works for the University of Harford and does color commentary for the men’s basketball team.

Regarded as one of the top 10 coaches in NBA history, Lenny Wilkins was the second African American to be a head coach in the NBA and is second all time in wins. From the 1969-70 to 2004-05 seasons, Wilkins coached seven teams and is best known for his work with the Seattle Supersonics, winning his first and only NBA championship in 1978-79 after reaching the finals the year before. Wilkins was an assistant coach on the 1992 United States Olympic gold medal-winning “Dream Team” and the head coach of the 1996 team that also won the gold. He won the NBA Coach of the Year award in 1994 with the Atlanta Hawks. Wilkins is one of three in the Naismith Memorial Basketball Hall of Fame as a player and coach joining the great John Wooden and Bill Sharman. Wilkins retired after the 2004-05 season with the New York Knicks with an overall record of 1,412-1,253 with 20 playoff appearances.  He is currently an analyst for Fox Sports Network Northwest covering college basketball.

Gaston spent his entire managerial career with the Toronto Blue Jays starting as the batting coach in 1982. In 1989, he was named Major League Baseball’s third African American manager and led the struggling Blue Jays to the playoffs. Three seasons later the Blue Jays won the first of back-to-back World Series championships making Gaston the first (and so far only) African American manager to win not just one, but two World Series. Gaston spent seven more seasons in Toronto and finished his coaching career with an 894-837 record, including four Eastern Division titles.

Bill Russell won 11 NBA championships as a player and is regarded as one of the league’s greatest players of all time. He soon became the first African American to win a major pro or college championship. Russell made his coaching debut in the 1966-67 season with the Celtics and won two NBA titles as a player/coach in 1967-68 and 1968-69. Russell also coached the Seattle Supersonics for three seasons (1973-1977) and one with the Sacramento Kings (1987-88) compiling an overall coaching record of 375-317. The Presidential Medal of Freedom award recipient in 2011 has had the NBA Finals Most Valuable Player Award named after him since 2009.

Tony Dungy’s list of accomplishments as a coach not only make him one of the top 10 coaches on this list, but maybe one of the top 10 coaches of all time in the NFL. Dungy is the first and only NFL coach to defeat all 32 NFL teams. His first head coaching job came in 1996 with the Tampa Bay Buccaneers and Dungy turned the perennial loser into a winner making the playoffs four out of six years. He would have his greatest success with the Indianapolis Colts who never missed the playoffs in his 12 seasons winning five straight division titles, and the 2006 Super Bowl. Three of Dungy’s assistant coaches (all African American) from his staff in Tampa Bay are currently coaching in the NFL. They are Lovie Smith of the Chicago Bears, Mike Tomlin of the Pittsburgh Steelers and Leslie Frazier of the Minnesota Vikings. Herm Edwards, who was also a Dungy assistant in Tampa Bay, coached the New York Jets and the Kansas City Chiefs. Jim Caldwell, a Dungy assistant in Indianapolis, coached the Colts for three seasons reaching the Super Bowl in 2009, but was fired in January. Dungy retired after the 2008 season with an overall record of 139-68 in 12 seasons with six division championships and having reached the playoffs 11 times. Dungy has been a best-selling author, has worked on two presidential councils, several evangelical organizations, and served as a mentor to players and coaches. He currently serves as one of the hosts of NBC’s “Football Night in America.”

After Tony Dungy became the first African American to win a Super Bowl in 2007, just two seasons later Pittsburgh Steelers Coach Mike Tomlin became the second. His 27-23 win against the Seattle Seahawks in Super Bowl XLIII in 2009, also made Tomlin the youngest coach ever in the NFL to win a championship, and the third youngest in major sports history in the U.S. at age 36. Tomlin is the only African American coach to take his team to two Super Bowls. So far in his five seasons as coach of the Steelers, Tomlin has never had a losing season and has won three division championships, two AFC titles and missed the playoffs only once (2009). He has an overall record of 60-28.

John Thompson took Georgetown University, a small, little-known, private, Catholic Jesuit school in the nation’s capital in the 1972-73 season and turned it into a national power. In the 1983-84 season, Thompson became the first African American to win a NCAA Division I championship and was a finalist a year later. In 26 seasons as head coach, Thompson and the Hoyas reached the postseason 24 times, including 19 March Madness appearances (14 straight), five National Invitational Tournament (NIT) appearances and the Final Four three times.  He also won five Big East regular season and conference tournament championships. Thompson was an assistant coach on the gold medal-winning U.S. Olympic basketball team in 1976 and coached the 1988 team to the bronze medal. He retired in January 1999 and was inducted into the Naismith Memorial Basketball Hall of Fame in October of that same year. Thompson finished his coaching career with an overall record of 596-239. Today Thompson’s son, John Thompson III, coaches Georgetown and Thompson himself works for Clear Channel Sports Talk Radio in Washington D.C. and hosts “The John Thompson Show” on ESPN 980.

Tubby Smith became the first African American coach in the history of the storied Kentucky men’s basketball program replacing Rick Pitino. Smith had the Wildcats right back on top in his first season with a 35-4 record and a 78-69 win against the University of Utah in the title game. Smith landed his first head coaching job at the University of Tulsa in 1991-92. The Golden Hurricanes had some of its greatest success under Smith reaching the Sweet 16 in 1993-94 and 1994-95. Smith’s next stop was at the University of Georgia for two seasons in 1995-96 and 1996-97 where he reached his third straight Sweet 16 in his first season with the Bulldogs. While at Kentucky, Smith never lost in the first round in his 10 seasons, winning 20-plus games each year, including five Southeastern Conference regular season championships and three SEC tournament championships. Smith won 100 games faster than any coach in Kentucky history except for Adolph Rupp. He was named Mission Valley Conference Coach of the Year twice (1994 and 1995), SEC Coach of the Year three times (1998, 2003, 2005), Jim Phelan Coach of the Year (2005), the Henry Iba Award winner (2003), Associated Press Coach of the Year and Naismith College Coach of the Year (2003). Since 2007-08, Smith has been the head coach at the University of Minnesota. His overall record going into the 2011-12 season is 467-195. He could very well finish his career as one of the top 10 coaches of all time in college basketball.

Nolan Richardson, another one of the top 10 coaches of all time is best known for his success as the head basketball coach at the University of Arkansas. Richardson is the second African American coach to win a NCAA Division I title, and is the only coach to win a National Junior College Championship, the NIT and a NCAA basketball championship. Richardson won a National Junior College Championship at West Texas Junior College in 1980, and in his first ever NCAA Division I coaching job at the University of Tulsa, he made an immediate impact by leading the Golden Hurricanes to the NIT title in his first year. In four years at Tulsa, Richardson never missed the postseason and compiled a 119-37 record. From 1985-86 to 2001-02, Richardson became the winningest coach in Arkansas history with a 389-169 record, winning a National Championship in 1994 and was runner-up a year later. His Razorback teams made him one of the top 10 coaches at the time, playing a style known as “40 Minutes of Hell.” They reached the Final Four three times and reached the postseason 15 out of 17 years. Richardson was named the Naismith Coach of the Year and the National Association of Basketball Coaches (NABC) Coach of the Year in 1984. His overall college record is 508-206. Richardson has coached the Panamanian National Team from 2005-07 and is currently coaching the Mexican National Team seeking a berth in the 2012 Summer Olympic Games in London. A medal in the Games would solidify his legacy on any top 10 coaches list.

In his fourth season with the Celtics, Rivers brought the proud franchise back to prominence by winning the NBA Championship in 2008 in six games against the Lakers. The Celtics were back in the Finals in the 2009-10 season, but lost to the Lakers in seven games. His first head coaching job was with the Orlando Magic from 1999-2004. He led the Magic to the playoffs in three out of five seasons, and was named NBA Coach of the Year in 2000. In his first season in Boston, he won the Atlantic Division with a 45-37 record. Going into the 2011-12 season Rivers has won four straight Atlantic Division titles, and signed a five-year $35 million contract extension. His overall record as a head coach is 563-452 going into the 2010-11 season.