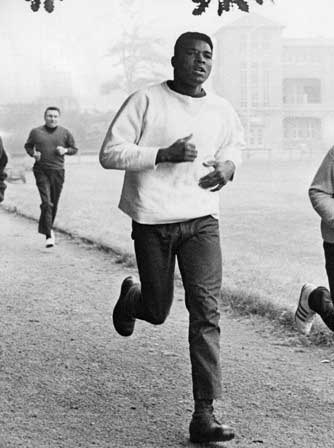 Top 10 Sports Legends—Remembering Those Past and Present

Muhammad Ali was the hands down number one choice for the top 10 sports legend. He personified sportsmanship in addition to bringing entertainment to boxing.

Another marquee athlete and definite financial draw for his sport is the second spot holder, Michael Jordan.  As “Air Jordan,” he propelled basketball to new levels as a sport and a marketer’s landscape.

At number three, Kareem Abdul-Jabbar brought a presence to basketball and a no-nonsense attitude and commitment to the game and the championships he helped to achieve both in college and in the pros.

Speaking of achievements, the fourth spot is held in reverence for baseball trailblazer Jackie Robinson, who selflessness and great sportsmanship paved the way for other players of color to participate in baseball.  When he broke the color barrier in 1947, it began a new era for baseball and for the country.

And speaking about breaking barriers, Tiger Woods taking the fifth spot, whose achievements on the green as a phenomenal golfer should more than surpass his personal problems.  His life should be a reminder to us all that even athletes are human and thus flawed.  He helped take golf into circles where people of color were traditionally uninterested and largely shut out of the sport.  We should continue to applaud his achievements in golf.

Back to the baseball diamond and the number six pick who is Henry “Hank” Aaron. This quiet giant took a great deal of heat when he broke Babe Ruth’s home run record as he maintained his cool and continued to hold true to his character and exceptional team play.

At number eight, Oscar “The Big O” Robinson, another dominant basketball player upon whose shoulders stands many talented athletes including Jordan and Abdul-Jabbar.

The women are not left out of the ranking as the remaining spots are future sports legends and another trailblazer.

With a tie at the number nine are two major tennis phenoms who are role models as well as sisters. Venus and Serena Williams have given African American girls and boys encouragement that they too can excel on the tennis courts both in the United States and abroad. Winning major titles including the U.S. Open and Wimbledon and making names for themselves as entrepreneurs, this enterprising duo have only just begun.

And it is only fitting that our top 10 list is capped off by another trailblazer and female tennis star Althea Gibson, whose courage and steadfast belief in her abilities despite the many odds made it possible for all that the Williams sisters and other players of color enjoy on the clay and grass courts of tennis.

As we look at these sports legends, we know that there are so many more who have made their mark on history and changed the way the games are played and the impacted the diversity of the players who are a part of them.  We thank them all.