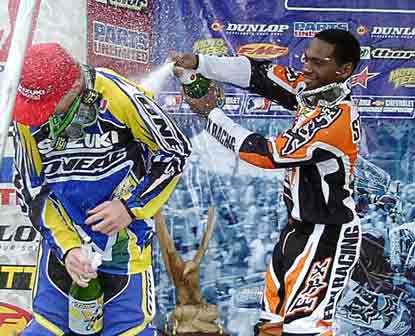 The Jackie Robinson of Extreme Sports

Born in 1985, James “Bubba” Stewart has been called the “Tiger Woods of super motocross” because of his domination of a sport as an African American with mostly Caucasian competitors. A better term for Stewart might be the “Jackie Robinson of super motocross.”

Like Robinson, and unlike Woods, Stewart is the first African American in the big leagues of his sport, and like Robinson, Stewart came from humble beginnings and has had to withstand racial slurs and bigotry while winning events.

The racism Stewart faced was profiled on ESPN in April 2009. According to Stewart in the report, he endured foul language questioning his heritage and family. Before that, his father, James Sr., collected cans for recycling and worked multiple jobs in order to support his son’s super motocross racing ambitions. The elder Stewart built a 40-acre track near their home in Haines City, Fla. so young James would have a place to practice.

James Sr. entered his son into his first race when James Jr. was just four. By seven, James Jr. was winning races as a sponsored rider. He won multiple amateur national titles all before the age of 16, James made a name for himself as one of the most promising future stars of the sport.

Because of his multiple amateur titles, his pro debut for the 2002 racing season was one of the most anticipated debuts in the history of the sport. While crashes and rookie mistakes kept him from winning the 2002 125 West Supercross title, he was named the 2002 AMA Rookie of the Year. He was also named one of “20 Teens Who Will Change the World” in the April 2003 issue of Teen People magazine.

For 2005, he moved up to the premier 450cc class for both the Supercross series and the Outdoor National Motocross series. While Stewart immediately showed that he had the speed to race with the top riders in super motocross, a practice crash that resulted in a broken wrist at Round 2 in Phoenix meant that he would have to wait before he notched his first career super motocross win.

On April 2, 2005, at Texas Stadium (in only his third race), Stewart captured his very first career super motocross victory. Stewart would go on to win the 2007 Supercross Championship. While “Bubba” Stewart continues to win races as a pro, he has also started to make big bucks in endorsements. Stewart’s sponsors include Kawasaki, Gatorade and Oakley, and he also has a role in an MX2002 game for Sony Playstation. Some estimates place his earnings from racing and endorsements at more than $10 million per year. He is well on is way to becoming an inspiration for other African Americans to participate in super motocross.

The rare combination of Stewart’s abilities on the track, his business success, and his pioneering spirit has made him a joy to watch and root for in the African American community. Much like African Americans in the 1940s and 1950s who did not have to be baseball fans to root for Robinson, Blacks today do not need an inherent interest in super motocross to root for Stewart to continue to dominate a sport that was not accepting initially, but is now helping to provide him with unimagined wealth.

As for James Stewart, Sr., he is mentoring another son to repeat James Jr.’s success in super motocross. It remains to be seen if lightening can strike twice.